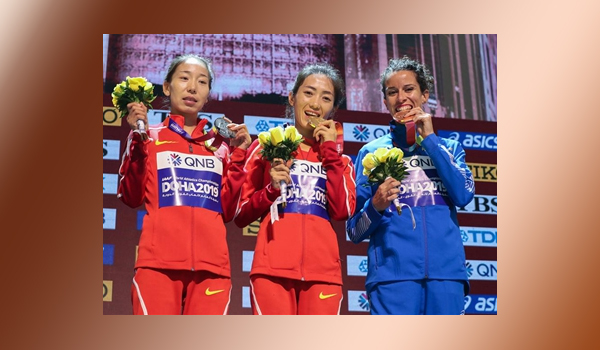 World recorder Liu Hong led China’s sweep of podium in women’s 20km race walk here on Monday while the United States improved their own world record to win the 4X400 meters mixed relay in the third competition day of the 2019 Athletics World Championships.
Olympic champion Liu, who holds both the 20km and 50km race walk world records, outraced her teammate and world No. 1 Qieyang Shijie in the last two kilometers to take the top honors in one hour, 32 minutes, 53 seconds, completing her world title “hat-trick” after victories in 2011 and 2015.
“The weather conditions are really a big challenge for us. Thanks to our teamwork, we had a better strategy and we just battled as a team, so we can get this good result,” said the 32-year-old Liu.
Qieyang Shijie snatched the silver in 1:33:10 followed by China’s world championships debutant Yang Liujing with seven more seconds in deficit.
It is the first time in the 36-year-history of the world championships for a team to sweep the podium in women’s race walk event.
The United States also made history as they clocked three minutes and 9.34 seconds to claim the first ever mixed gender relay gold medal at the World Championships, beating the world record of 3:12:42 they set on Saturday in the heats.
Jamaica came second with a national record of 3:11.78 while Bahrain took bronze in an area record time of 3:11.82.
“The event is fun, very exciting. The people in the stands must have been very excited to see men fight against women,” said Jamaica’s Tiffany James.
Jamaica’s double Olympic champion Shelly-Ann Fraser-Pryce, 32, came back to the World Championships to regain her crown in the 100m.
Fraser-Pryce missed the 2017 London worlds as she gave birth to a baby boy in August that year but reclaimed the title in Doha in a world leading time of 10.71. British Dina Asher-Smith finished second in 10.83 and Marie-Josee Ta Lou of Cote d’Ivoire came third in 10.90.
“Standing here having done it again at 32 and holding my baby, is a dream come true. I had no sleep last night. Last time I was at a major championships was 2016 and I just could not sleep with nerves,” said the joyful Jamaican.
European indoor champion Anzhelika Sidorova, an authorized neutral athlete from Russia, cleared 4.95 meters to lift the women’s pole vault gold medal.
Sandi Morris of the United States finished second at 4.90. Olympic champion Katerina Stefanidi of Greece bagged bronze in 4.80.
“All my performances at the World Championships were too unsuccessful. Certainly I looked forward to stopping this bad tradition,” said the 28-year-old Sidorova. “I was crying because I was really happy.”
Two-time Olympic champion Christian Taylor of the US won his fourth world triple jump title at 17.92 meters. His compatriot Will Claye took silver at 17.74 and Hugues Fabrice Zango of Burkina Faso was third in 17.66.