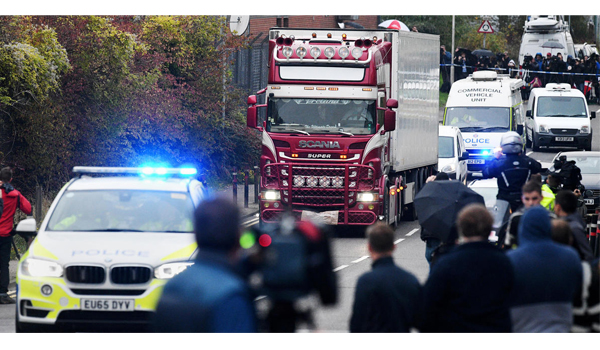 The UK police are currently unable to certify that 39 people, whose bodies were found inside a truck container in the UK county of Essex, had Chinese citizenship, the Asian country’s embassy in the United Kingdom said on Friday.
“The Chinese Embassy has sent a team led by the minister-counsellor in charge of consular affairs to Essex, England. They have met with the local police. The police said that they are verifying the identity of the deceased, whose nationality still cannot be confirmed,” the embassy said in a response to a media outlet’s question, published on its website.
The container with the 39 bodies was recovered in the Waterglade Industrial Park early on Wednesday. A 25-year man from Northern Ireland— the driver of the truck — was arrested on suspicion of murder.
The Bulgarian Foreign Ministry subsequently said that the truck had been registered in the country’s city of Varna.
Moreover, Irish vehicle company Global Trailer Rentals (GTR) told Sputnik late on Thursday that it owned the truck but the lorry had been rented. The company said all its vehicles had been equipped with GPS tracking systems so it had passed all the data about people who used the truck to the authorities.
Media have reported that apart from opening a murder probe, the authorities have launched a parallel investigation into whether people-smuggling criminal groups had a role in the incident.