Dasara festivities: A blend of the new and old 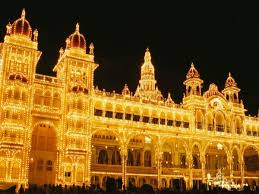 Celebrating the triumph of good over evil, Dasara evokes different images pan-India while in the City of Palaces, Mysore, the famous festivities kick off on Sunday with caparisoned elephants and illumination, and cultural programmes which are a fusion of classical and modern.

Retaining its traditional roots while adapting to modern requirements, Mysore Dasara is a living heritage, depicting both continuity and change without compromising on the religious aspects.

Karnataka government has decided to celebrate the ten-day festival, in all its traditional glory and splendour. The countdown has begun and expectations are high for the September 29-to October 8 festivities, slated to be benchmark for future editions of the event.  (UNI)