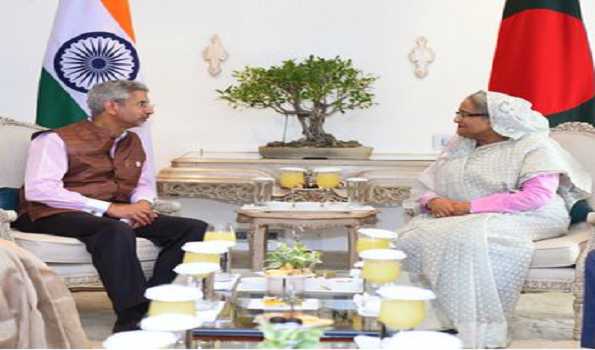 On a four-day visit to India since Thursday, Bangladesh Prime Minister will hold bilateral talks with Prime Minister Narendra Modi later in the day and also call on President Ram Nath Kovind.

Ms Hasina is likely to raise the Teesta water-sharing agreement and sharing of waters of other common rivers during her talks with the Prime Minister.

India and Bangladesh would focus on enhancing bilateral ties including on people to people level contacts, trade relations and will strive to ensure that some skirmishes in the border come down to ‘zero’.

MEA spokesman Raveesh Kumar said on Friday: “It is important to understand that due to concerted efforts by the two sides including border guards in both countries and under the leadership of two Prime Ministers, the number of such incidents have actually come down drastically…..”.

He said: “But we are doing now, we are trying to discuss that following the demarcation based on the Land Boundary Agreement, whether we can bring these incidents to zero”.

The spokesman underlined – “how this has to be done, this will be discussed between two sides”.

However, he said some of the ‘isolated incidents’ are regretted by both sides and thus border guards from both countries will see that such incidents do not recur.

To a question whether Teesta water share issue will figure at the talks, MEA spokesman said India’s position on the same is well known to Bangladesh.

“Apart from Teesta there are at least seven other trans border rivers,” he said.

Reports from Dhaka earlier indicated that a framework for water-sharing of multiple rivers may be signed.

A day before her meeting with Prime Minister Modi, his Bangladeshi counterpart on Friday raised concerns on ban on exports from onion.

Asked to comment on Ms Hasina’s comment at the weekly media briefing, Ministry of External Affairs spokesman said, “We are trying to see how we can kind of accommodate the concern which has been reflected by the Prime Minister of Bangladesh”.