Eastern Economic Forum 2020 to take place in Vladivostok in Sep 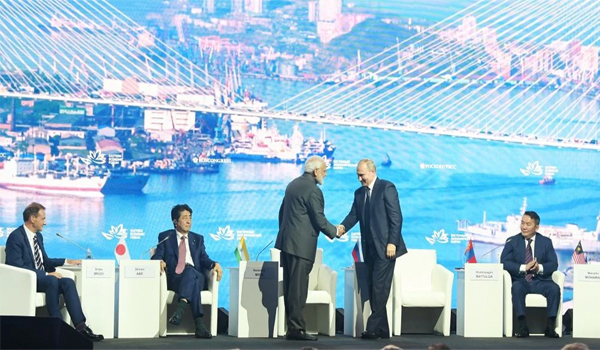 Vladivostok, Nov 7 (Sputnik)The next Eastern Economic Forum will be held on September 2-5 next year at Far Eastern Federal University in the Russian city of Vladivostok, the Roscongress Foundation, its organizer, announced on Thursday.

“The 6th Eastern Economic Forum will take place on 2–5 September 2020 on the campus of the Far Eastern Federal University,” the foundation said in a statement.
Anton Kobyakov, an adviser to the president of the Russian Federation and the executive secretary of the forum’s organizing committee, noted that the forum had become one of the leading events for facilitating multilateral partnership and international cooperation.

“Every year, the front-runners of leading countries in the Asian-Pacific region meet here to discuss global issues of world economy. I am sure that the Forum will keep its investment component in the future. At the same time, the Eastern Economic Forum is gaining importance from the point of view of humanitarian and cultural contacts,” Kobyakov said, as quoted in a statement.

The Eastern Economic Forum was established in 2015, by an executive order of Russian President Vladimir Putin to facilitate the development of eastern Russia’s economy and strengthen cooperation within the Asia-Pacific region. Rossiya Segodnya International Information Agency is an official media partner of the forum.