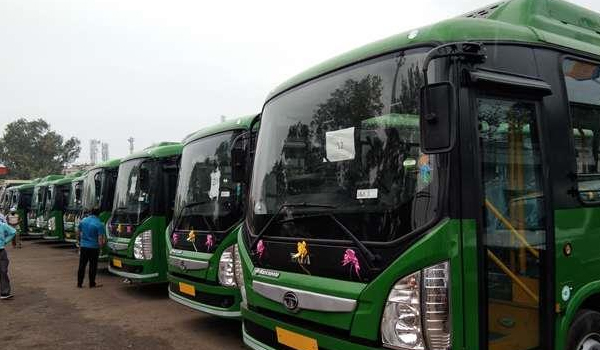 Jammu, Nov 21 (UNI) Jammu and Kashmir Government has formally accorded sanction to the introduction of Jammu and Kashmir Transport Subsidy Scheme for replacement of 15 year old buses with Rs 5 lakh subsidy to Transporters.
The order issued by the Principal Secretary Transport Department Dr Asgar Hassan Samoon here on Wednesday which reads that the scheme is to provide impetus to the public transport by providing subsidy to the transporters for introducing new eco-friendly fuel efficient buses compliant to BS-IV and above norms.
Dr Samoon also said it will ensure optimum usage of available road space by transporting maximum number of people per unit of road space which would obviate the problem of congestion, traffic jams and pollution.
The scheme is also intended to help in curtailing rising car ownership, problem of vehicle parking and reduced road space, he said.
Notably, Rs 25 crore have already been earmarked for the purchase of old buses by private players in 2019-20 Budget.
The amount of subsidy would be Rs 5 Lakh per Bus.
The order also reads that the scheme may be extended to mini buses/matadors in near future.
To ensure transparency, open advertisement will be issued for calling interested operators to avail subsidy.
“The subsidy needs to be provided to only those who are in need of loan to raise capital, state pollution board will certify age of the vehicle. J&K Bank will be one of the banks that may provide loan to the operators besides banks shall make the payment to OEM along with subsidy,” the scheme reads.
According to the scheme, for availing the subsidy, the concerned officers would be required to condemn the vehicle/s and get it scrapped and only after deregistration of vehicle/s they shall be allowed to avail the subsidy.
For periodically reviewing the working of the scheme a Committee will be formed with Principal Secretary Transport as Chairman, Transport Commissioner J&K as member, RTO Jammu and RTO Kashmir as Member Secretaries for Jammu and Kashmir division respectively.