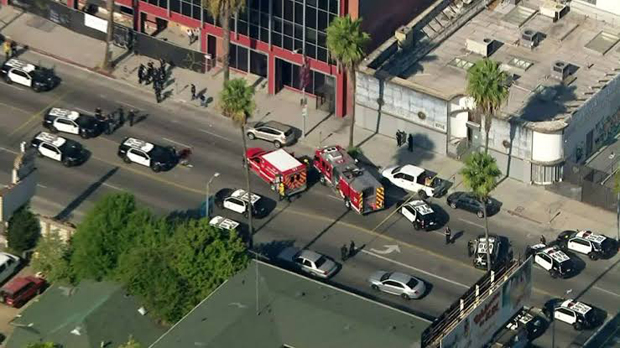 Moscow, Nov 26 Hollywood police shot and killed a man armed with a machete knife after he robbed a store and carjacked a vehicle on Monday, Los Angeles Police Department (LAPD) spokesman Lieut. Chris Ramirez has announced.

“Early this morning, around 11:30 am [19:00 GMT] a suspect entered a local autopart store on Highland [Avenue], just south of Sunset [Boulevard], where he committed a robbery at knifepoint. That knife was a machete that was eventually located here on scene. The suspect then left that location with property in hand and walked up to a local fast-food restaurant drive-through, also on Sunset and Highland. At that point he carjacked a victim out of his car … got into that vehicle and tried to force his way from police,” Ramirez said on Monday, in a video statement posted on the LAPD Twitter page.

According to LAPD, the suspect eventually crashed into two police cars, got out of his car and tried to run from the officers.

“The suspect was struck by gunfire, and was transferred to a local hospital where he has since been declared deceased. In the process, one officer had sustained minor injuries on his elbow and knee, but was treated on scene and was released,” Ramirez said.
He added that the suspect’s machete was “large,” about a foot or a foot and a half in length (30-45 cm). “We anticipate the investigation to last anywhere between 6 to 8 hours,” the police spokesman said.

He advised the public to avoid the area around Sunset Boulevard and Highland Avenue as it would be closed off amid the investigation.