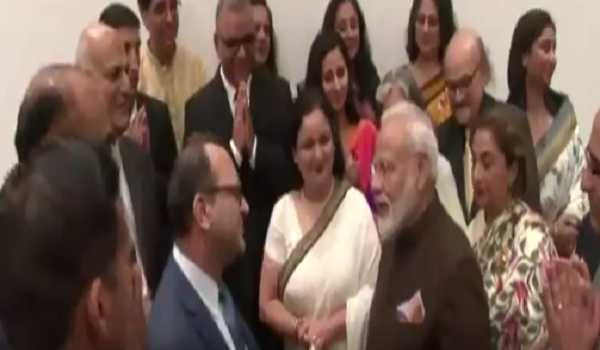 Someone who takes pride and also excels in establishing intimate bond with his audience, Prime Minister Narendra Modi left his charm over Kashmiri Pandit delegation here on Sunday.

But as the Shloka ended with words ‘Namah Namah’ and praying for the betterment of humanity including people of Jammu and Kashmir; Prime Minister in his irresistible style added: “again Namo Namah” – throwing the entire group including women into peels of laughter.

The much impressed gathering could not help applauding Prime Minister’s sense of wit with a big applause.

As Prime Minister’s name is Narendra Modi, he is often given the acronym ‘Namo’ and the phrase ‘Namo Namah’ is used more often to lay emphasis either on his unique style of functioning or his much successful career graph.

One delegation leader S Kaul later said: “We thanked the Prime Minister on behalf of the 7 lakh Kashmiri Pandits all over the globe for such a historic decision”.

During interaction, Prime Minister told them “…..you have suffered a lot together, now we have to build a new Kashmir”.

Within hours of landing in the United States, Prime Minister met a delegation of Kasmiri Pandit community which ‘unequivocally supported’ Government of India’s decision to abrogate Article 370 and bifurcate the erstwhile development-starved and militancy-hit Jammu and Kashmir.

‘In Houston, a delegation of the Kashmiri Pandit community met the Prime Minister. They unequivocally supported the steps being taken for the progress of India and empowerment of every Indian, said the PMO in its tweet.

This is Prime Minister’s first visit to the US since August 5 when his government decided to abrogate Article 370 and bifurcate J&K into Jammu and Kashmir and Ladakh regions.

Prime Minister Modi was also felicitated by delegations of Dawoodi Bohra community and the Sikh community here on the very first day of his seven-day trip to the US.  (UNI)