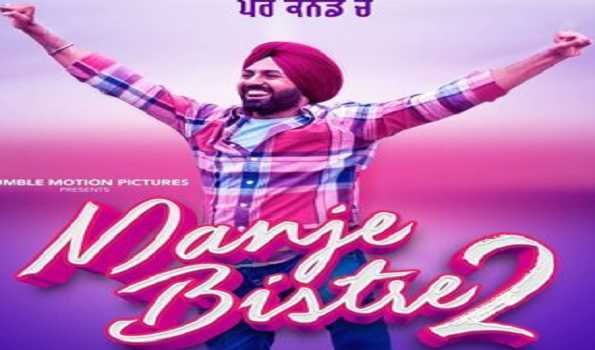 It was the overwhelming response to his 2017 comedy-drama ‘Manje Bistre’, which very lightly brought in the long forgotten tradition of 90s weddings in Punjab, that impelled

Gippy Grewal to work on the sequel of the film.

Talking to UNI ahead of thevfilm’s release on April 12, Gippy said ,’we had not expected it to do so well. We received so much love and appreciation that we could not help ourselves from going for a sequel.’

‘Manje Bistre’, meaning pillow and mattress in Punjabi ,was a 2017 comedy-drama, which very lightly brought in the long forgotten tradition of 90s weddings in Punjab.

“During 90s, the entire family would sleep under one roof throughout the rituals,” said Grewal, who plays the flamboyant ‘Sukhi’.

In fact it is the ‘backdrop of tradition” that the 2017 film and the sequel highlighted is what the actor likes most about both the films.

‘That time spent together under single roof worked as a binding thread as everyone present there would share their experiences and emotions with one other and by the time the wedding was concluded, a sense of belongingness was left deep within us, making the family even more bigger,’ shared the star.

The first movie inspired more than 10,000 couples in past two years to wed the customary way.

on being asked how the first part us different from the sequel, Gippy Grewal said,’the second part has a happier feel about it,’

While everyone wants a stint of their own with success, very few have mastery over handling failure, the ‘Carry on Jatta’ star’s mantra for keeping calm during such circumstances is quite simple: One has to prepared for everything.

“Anything can happen in this industry,” he says.

“Earlier, the setbacks would make me feel hopeless and downtrodden, but over the time I have learnt to take them as lessons.”

Actor turned producer also holds that if a movie is not good enough, then it is bound to flop irrespective of its star cast.

“Everyone has to face failure, from Tom Cruise to Shah Rukh Khan, however, we should always introspect on where we went wrong and work on it,’he said.

Speaking of his future projects, the ‘Angreji Beat’ star said, “I am planning to record an album.”

“It will be a peppy number with a feel-good vibe,” he signed off with a smile.