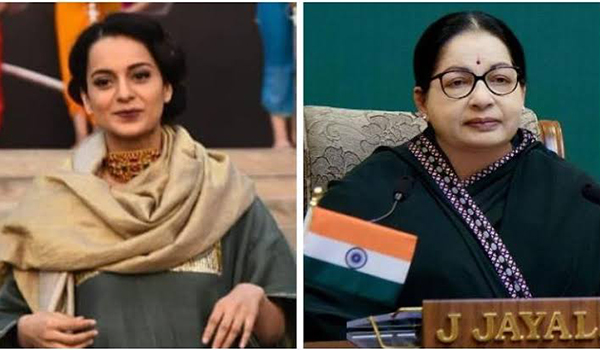 Mumbai, Nov 23 (IANS) The first look poster of “Thalaivi”, which casts Kangana Ranaut as late Tamil Nadu chief minister J. Jayalalithaa, was launched on Saturday, and Twitterati are divided in their opinion.

While some have panned the prosthetics that have gone into transforming Kangana into Jayalalithaa, others expressed excitement at the idea of seeing the actress essay the late politician in the upcoming film.

If the poster, which comes with a short teaser, is anything to go by, Kangana looks nothing Jayalalithaa in the film. Hardcore fans expect the actress to win a fourth National Award for her starring role in the film, which is scheduled to release on June 26 2020, but many others on social media were far from impressed.

While many social media addicts dismissed the poster merely with LOL emojis, others were more expressive with words.

“Lmao this looks so freaking fake,” wrote one user.

“She neither looks Kangana nor Jayalalitha”, said another user.

“The legend we know, but the story that is yet to be told! Presenting #KanganaRanaut in & as #Thalaivi. A film by #Vijay, arriving in cinemas on 26th June, 2020,” wrote @KanganaTeam.

“A superstar heroine, a revolutionary hero. Watch her story unfold!” Kangana;s team added. Many hoped Kangana would make up with her acting where the make-up and prosthetics department have struggled.

“Make-up achcha nahi kia. Baaki acting will be the key. She is my favourite. So hope other posters will do justice,” wrote a fan. “No doubt about her acting skills but her makeup looks like Chachi 420!” tweeted another fan.

Fans are hoping for the best. “She’s gonna kill this role! Wow #KanganaRanaut,” wrote a fan, while another added: “Toooo gud.. waiting for the movie..only and only can play this role..she is definitely from a diff world.”

“This is awesome No one else would have more apt than Kangana,” said another user.
“Thalaivi” also features Arvind Swami, and the film is directed by Vijay.