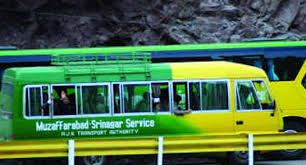 Families divided due to partition in 1947 continue to wait for the resumption of service of the weekly Karvan-e-Aman bus, operating between Srinagar and Muzaffarabad, capital of Pakistan-occupied-Kashmir (PoK), since March 4 this year.

Meanwhile, the Cross-Line of Control (LoC) trade between the two divided parts of Jammu and Kashmir also remained suspended since March 4 following intelligence reports that it was being used for terror funding.

Divided families, living on both sides of the LoC, continue to suffer as bus service could not be restored because of prevailing situation on the LoC and International Border (IB), where Pakistani troops have been violating 2003 ceasefire more frequently, targeting forward posts and civilian areas.

Official sources told UNI on Monday that bus remained suspended since March 4, badly affecting the divided families who wanted to visit each other.

There is no word from PoK side on resumption of the cross-LoC bus service, they said adding that the service was suspended on March 4 when a message was received from across the LoC that Aman setu bridge needed some repair from the PoK side. Later, no message was received, the sources said.

The bus was introduced on April 7, 2005 when India and Pakistan decided to allow travel of divided state subject families on ”route permits” instead of International Passports. However, route permit was being issued to a person only after his or her name was being cleared by the intelligence agencies from both sides.

Despite opposition by militant organisations, almost all separatist leaders barring Hurriyat Conference (HC) chairman Syed Ali Shah Geelani, currently under house arrest, and Democratic Freedom Party (DFP) chief Shabir Shah travelled in the bus to PoK and Pakistan. Shah is under detention in Delhi’s Tihar jail for the past two years after his arrest by Enforcement Directorate.

Prior to the launching of the bus service, the people of Jammu and Kashmir could visit their relatives in PoK only via Delhi or Wagah border on International passport.