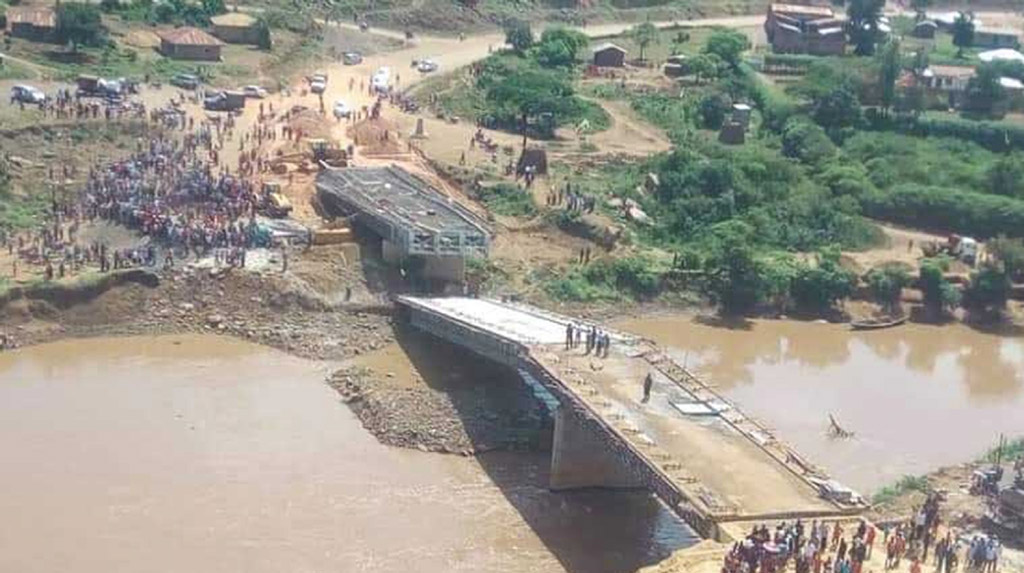 Nairobi: The investigation against a Chinese company into a collapsed bridge in Kenya – spanning 100 metres and connecting Sigiri and Khainga villages – continues even as President Uhuru Kenyatta seeks more foreign investments from China for infrastructural development.

On June 26, 2017, the $12 million Chinese-built Sigiri bridge collapsed before it could be inaugurated. The tragic incident took place four weeks to the scheduled completion date. As planned it would have been a nine-meter wide bridge and 100 meters long.

It was a much-hyped project in Busia county. The bridge was to be constructed over River Nzoia connecting Sigiri and Khainga villages. The decision to construct the bridge was taken by President Kenyatta after it came to light that nine people had drowned and died in 2014 while crossing the river in a canoe.

He then had stated: “This bridge will significantly reduce deaths… It is constructed by my government at a cost of 1 billion Kenyan shillings and will be completed by mid-July.” But before it could be completed it collapsed, less than two months before presidential polls scheduled for August 8, 2017. China Overseas Engineering Group Co. Ltd won a contract from the Kenyan government to build a bridge on the river Nzoia at Budalangi in Busia County. Budalangi is one of seven constituencies in Busia County.

The contract was awarded by Kenya Rural Roads Authority (Kerra), on behalf of the Kenyan government. The contract was to design and build the bridge over an 18-month period and then provide maintenance for five years. The Chinese company has a corporate office at Ngong Raod in Nairobi. Once the company got the contract, they set up a site office, a kilometre away from the bridge. Sources said that President Kenyatta relied heavily on Chinese-built and Chinese-financed projects for infrastructure promises.

On May 31, the president launched the Madaraka Express, the country’s largest investment since independence, between the port city of Mombasa and the capital city Nairobi. The railway project is to cross Kenya and connect it to several other east African countries. The $3.8 billion railway was financed by China’s Eximbank. It is alleged that the cost of the construction was almost double than Chinese-built railway connecting Addis Ababa, the capital city of Ethiopia to Djibouti.

After the collapse, a probe started into the matter. The probe was awarded to Eng. John Mosonik, Principal Secretary, Infrastructure, Ministry of Transport and Infrastructure, Housing and Urban Development. Kerra, on behalf of the Kenyan government, said the contractor was awarded the job at “approximately Sh 900 million”. But President Kenyatta said the bridge was built at Sh1 billion. Later Kakamega County spokesman Dickson Rayori said that Sh1.2 billion was quoted by the highest bidder, who had submitted superior design and construction plans than China Overseas Engineering Group Co. Ltd. During the probe, it was found that Chinese company had hired Mahavir Transporters and Contractors for Sh127.7 million for designing and balancing job of the bridge.

It was further found that another bridge known as Khaunga Bridge, over the same river near Mumias, was built at a fraction; less than Sh128 million. The authorities were amazed to know that the bridge at Sigiri was being built for approximately Sh 900 million. For the marginal difference in length, the prices for the two projects have become incomparable. However there was no logic of Sigiri being six times costlier, said a source.

Mosonik then asked for reports from different agencies and professional bodies. The workers at the site told investigators that the fault was due to lack of balance and possibly that the rush in construction may have denied the concrete sufficient time to cure leading to collapse.

Soon after the collapse, opposition leader Raila Odinga attacking the President referred to him as ‘tenderpreneurs’, the government officials that commission projects for financial gain. In 2017, Odinga was fighting a presidential candidate against President Uhuru Kenyatta. Uhuru is the son of Kenya’s founding father, Jomo Kenyatta. He had attended Amherst College in the US where he studied political science and economics.

In the meantime, Uhuru Kenyatta alleged that Odinga is a project of foreign governments doing the bidding of former colonial powers through the International Criminal Court. Kenyatta was facing an indictment by the ICC on charges of crimes against humanity. After winning the presidential election twice, Kenyatta through diplomatic channels mobilised many African leaders to put pressure on the ICC to the point of threatening to withdraw from the international court if it did not drop his and Kenyan Deputy President William Ruto’s cases.

Both cases against them have now been dropped due to a lack of evidence. However, ICC says its prosecution witnesses were intimidated and says the cases could be resumed. This has made Kenyatta stronger and move away from European nations and closer to China. “Whether the people (Chinese company) responsible for the collapse of the bridge would ever face the music or would be set free is still a matter of debate,” said sources.