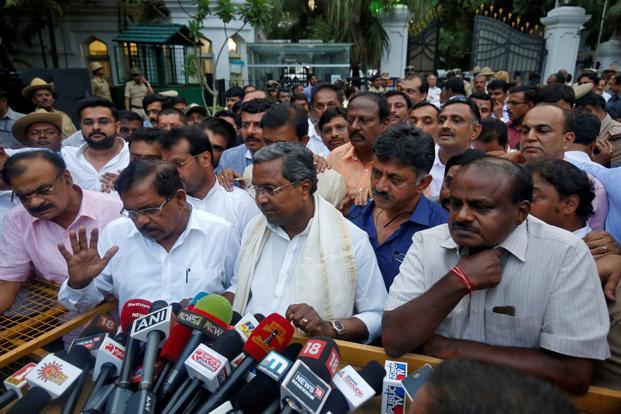 The Bharatiya Janata Party has just been handed over a humiliating defeat by the coalition of the Congress and Janata Dal (Secular) in the bye elections in Karnataka. Out of the three Lok Sabha and two assembly seats for which elections were held, the BJP could scrape through in one Lok Sabha seat only.

Four to five months before the general elections are too small a time to learn any lesson but the BJP ought to do some soul searching. Whether Prime Minister Narendra Modi and his confidante BJP president Amit Shah will rectify themselves or commit bigger blunder will be known soon.

The defeat in bye elections with huge margins is a pointer to things waiting in the wings. B.Y. Raghavendra, son of BJP strongman B.S. Yeddyurappa, won by a margin of over 47,000 votes in the Shivamogga Lok Sabha seat. A margin of over 47,000 is not a small one but considering that Yeddyurappa had won the seat by a whopping margin of 3.30 lakh votes in 2014, the reduced margin is a cause for worry.

Most shocking is the fact that the BJP imported a candidate from the Congress to field against JD (U) candidate Anitha Kumaraswamy, wife of Karnataka chief minister H.D. Kumaraswamy, in the Ramanagara assembly constituency on the eve of the elections and he ditched the BJP just two days before the voting. The BJP lost by a huge margin.

What kind of poll strategy Modi and Shah are making? Will they stop importing candidates from other parties, particularly the Congress, and instead rely on their own man and organisational strength of both BJP and RSS?

When will the Election Commission of India learn the lesson that toeing the government line is always not good? When the general election is not even six months away what was the necessity to hold bye elections to three Lok Sabha seats?

Perhaps the BJP thought that by holding the bye election, it would trigger and widen the rift between JDS and Congress and by defeating the alliance partner (they fondly hoped) they would go round the country using 24/7 media, including the social media, that 2019 was already clinched and “Pappu” should sleep at home. But fortunately or unfortunately, the outcome was just opposite.

Here are few lessons the BJP must keep in mind:

1. Never import leaders from other parties unless it is absolutely necessary.
2. Never try to imitate the Congress.
3. Never overuse or misuse the Constitutional institutions as the stake are yours not theirs.
4. Do not deride the supposedly non-existent ‘mahagathabandan’ (grand alliance). Remember that the NDA itself is a mahagathabandhan.
5. Do not waste your time in manipulating things so that there will not be mahagathabandhan. At best alliance at the state level will come about. However, the election results of three states may or may not trigger a new alliance formation.

(Hota is a former Lok Sabha member of Sambalpur. Views are personal)