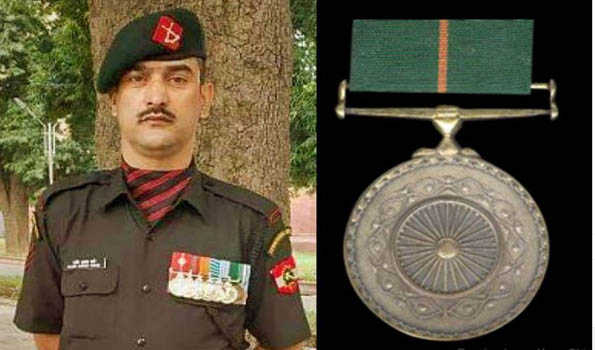 His wife Mahajabeen received the award from President Ram Nath Kovind at Raj Path just before the parade began.

Prior to joining the Army, the late Lance Naik Wani was a militant-turned-soldier who had joined the Army’s 162 Infantry Battalion (Territorial Army) Jammu and Kashmir Light Infantry in 2004.

Since his enrollment in the Army, Wani, SM, epitomised qualities of a fine soldier.

He always volunteered for challenging missions, displaying great courage under adverse conditions, exposing himself to grave danger on numerous occasions in the line of duty. This is evident from the two gallantry awards conferred on him earlier.

Lance Naik Nazir, yet again insisted on being part of the assault team during Operation Batagund launched by 34 Rashtriya Rifles Battalion on November 25, 2018 post receipt of credible intelligence regarding presence of six heavily armed terrorists in Shopian district of Jammu and Kashmir.

Tasked to block the most likely escape route, Lance Naik Nazir, moved swiftly with his team to the target house and tactically positioned himself within striking distance.

Undeterred by the situation, the NCO held ground and eliminated one terrorist in a fierce exchange at close range. The terrorist was later identified as a dreaded district commander of Lashker-e-Taiba.

Thereafter, displaying exemplary soldierly skills, Lance Naik Nazir closed in with the target house under heavy fire and lobbed grenades into a room where another terrorist was hiding.

Seeing the foreign terrorist escaping from the window, the NCO encountered him in a hand to hand combat situation. Despite being severely wounded, Lance Naik Nazir eliminated the terrorist.

Showing utter disregard to his injury, Lance Naik Nazir continued to engage the remaining terrorists with same ferocity and audacity. He injured yet another terrorist at close range, but was hit again and succumbed to his injuries.(UNI)