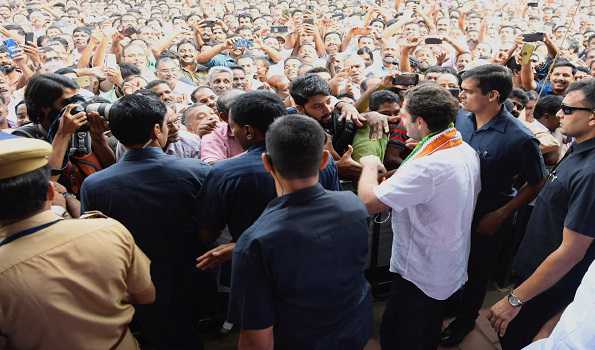 Congress leader and local MP Rahul Gandhi called on the youth on Friday, who are on a fast at Kalpetta since the last ten days, demanding the withdrawal of the night travel ban through the Bandipur Tiger Reserve on the Kozhikode-Bangalore National Highway-766, and expressed his support and solidarity to the cause..

Addressing the gathering who assembled at the venue of fast, Mr Gandhi said ‘even as the need for wildlife protection is an important aspect, the peoples’ problems should also be addressed’.

This would be possible by approaching the legalities tactfully. The problems of the people of Wayanad has to be addressed with utmost importance even as necessary protection to the wildlife is ensured,  Gandhi said.

The MP also visited those who were admitted to the hospital following fatigue due to fasting.

It was about a decade ago that travel in this route was banned during the night time, forcing vehicles from Kozhikode side take a deviated route via Iritty making the travel longer and difficult for thousands of vehicles from South Malabar region.

Now the people of Central Malabar, comprising the districts of Wayanad, Kozhikode and Malappuram hope to get a favourable status quo if the night travel ban is not lifted by the Supreme Court as It had sought a response from the Centre on imposing a 24-hour ban.

A possible 24-hour ban imposed, as indicated by the apex court as an observatory remark during the hearing of the case, leave alone lifting of the night travel ban, will have far reaching consequences for the people of these three districts. (UNI)