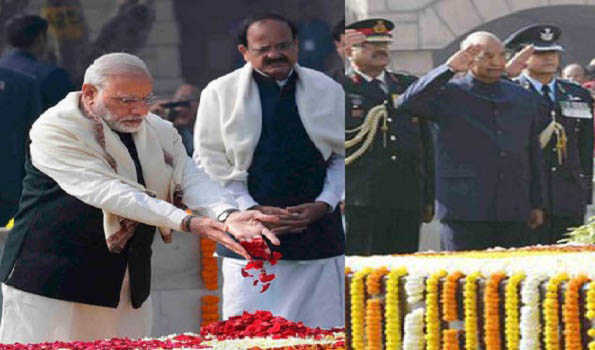 Taking to micro-blogging site twitter, the President said, ‘On Martyrs’ Day, we gratefully remember Mahatma Gandhi and the countless freedom fighters who sacrificed their all for our Independence”.

Mr Naidu said, ‘On this Martyrs Day, I join all country men in paying homage to Mahatma Gandhi and all the valiant people, who had sacrificed their lives for the country. #martyrsday.’

“Let us rededicate ourselves to the high ideals and values set by the Father of the Nation and all other martyrs on this solemn occasion. #martyrsday,” Mr Naidu added.

Mr Modi said, “Remembering Bapu on his Punya Tithi. We reiterate our commitment to follow the path shown by him and abide by the values he stood for.”

“We salute all the martyrs who laid down their lives for India. The country remains eternally grateful to them for their service and sacrifice,” Mr Modi added.