Revisiting night of terror when India’s commercial capital was attacked 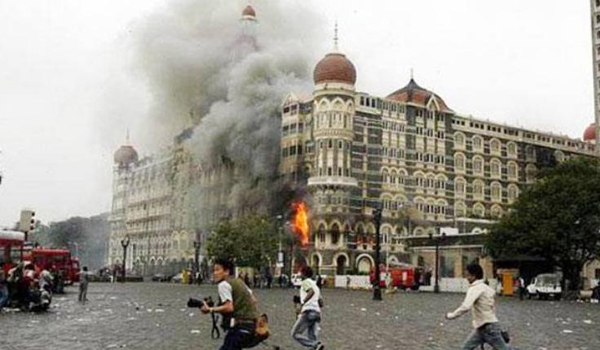 Mumbai/New Delhi, Nov 26 Terror struck Mumbai on the night of November 26, 2008, when 10 Kalashnikov-wielding terrorists from Pakistan attacked India’s commercial capital, striking simultaneously at five major locations, and shooting dead 166 people, including many foreign nationals. The 10 Lashkar-e-Taiba terrorists had traveled from Karachi to Mumbai on a fishing trawler they had hijacked. They killed the four crew members, throwing their bodies overboard, and slit the throat of the captain.

They docked the tug at the Mumbai waterfront near the Gateway of India monument. The terrorists hijacked cars, including a police van, and split into different groups to carry out the attacks. The targets they attacked were two luxury hotels, Oberoi-Trident Hotel and Taj Mahal Palace and Tower Hotel, a Jewish cultural centre – Chabad House at Nariman, ACafe Leopold – frequented by Western backpackers, the Chhatrapati Shivaji Terminus railway station, the main railway station and the site of most of the killings, and Cama Hospital. The terrorists used automatic weapons and grenades to storm the sites.

Nine of the gunmen were killed during the attacks, while Mohammed Ajmal Kasab was captured alive. He was executed in November 2012. The Chhatrapati Shivaji terminus was the site of the first attack. At around 9.20 p.m. Kasab and another Pakistani terrorist opened indiscriminate fire into the teeming crowds at the station. The attack lasted about 90 minutes, leaving 58 people dead and over 100 injured. The second attack was reported about 8-10 minutes later — the Nariman House business and residential complex housing the Jewish Chabad Lubavitch outreach centre.

Before attacking it, the terrorists blew up a gas station. They killed the rabbi, his wife and five Israeli hostages during a three-day siege. The two-year-old child of the rabbi survived after his Indian nanny Sandra Samuels smuggled the baby to safety. At around 9.40 p.m., four terrorists struck the upscale and popular Leopold Cafe. They sprayed gunfire on the diners, killing 10 of them. The attack lasted between 10 to 15 minutes. The terrorists also planted bombs in two taxis that killed five people and injured 15. They then proceed to the Taj Mahal Palace and Tower Hotel. The terrorists entered the hotel by breaking down a side door. They first attacked guests around the swimming pool and then moved inside to the bars and restaurants. Two of the terrorists entered the hotel through the front door and started shooting and throwing grenades. They killed at least 31 people in the four-day siege.

The terrorists set off bombs under the central dome of the Taj Mahal hotel, setting off a massive fire, which later raged through the top floors of the Taj. The hotel was stormed by commando troops who helped to evacuate people trapped inside their rooms.  The Oberoi-Trident Hotel was attacked by two terrorists who entered the hotel through the restaurant, and fired on the crowd. They later moved through the hotel looking for targets. They killed approximately 30 people in a siege that lasted three days.

After attacking CST railway station, Kasab and his fellow terrorist Ismail Khan targeted the Cama Hospital. They arrived at the back gate of the hospital, but the alert hospital staff had locked all the doors. The two men then ambushed a police team outside the hospital, killing six of them, including ATS chief Hemant Karkare, and hijacked their jeep. Kasab and the other terroritst Ismail Khan were intercepted near Girgaum Chowpatty, where police constable Tukaram Omble grabbed the barrel of their rifle. This gave the police team time to overpower Kasab and capture him. The other terrorist was killed.

Kasab was tried and sentenced to death in May 2010. He was hanged at the Yerawada jail in Pune in November 2012. India had permitted the American Federal Bureau of Investigation (FBI) to interrogate Kasab directly. A team of FBI officials flew in from New York to learn what they could about the attack. Kasab independently confirmed to the FBI what he had told the Indian police — that he was a Pakistani citizen and a member of LeT, and the attack was being directed in real-time from the Pakistani port city of Karachi via mobile and Internet telephony.