Thousands of women rally in Istanbul against male violence 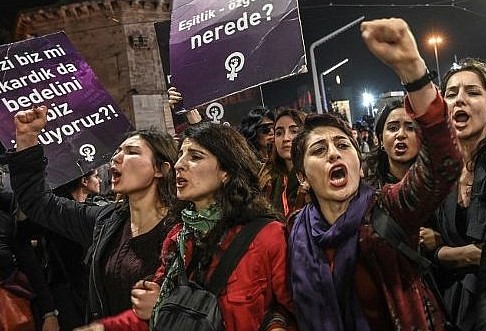 Istanbul, Nov 26:  Thousands of Turkish women on Monday flocked to the streets of Istanbul to mark the International Day for the Elimination of Violence Against Women.On the iconic Istiklal Avenue, protesters held a symbolic march to commemorate women in Turkey who lost their lives through male violence, the Xinhau news agency reported.

Playing drums and chanting slogans, they denounced all kinds of violence against women, including sexual abuse, in the country.”We want to live,” the protesters shouted, echoing the last words of Emine Bulut, who was killed by her husband under the gaze of her daughter in August.

“I don’t want to die,” Bulut said before she died as her daughter lamented in shock, “Mom! Please don’t die.”We are not afraid and we will not obey,” shouted the protesters.After the rally ended, a brawl erupted between police and a group of demonstrators, and police used pepper gas spray to disperse the group.

A total of 378 women have been killed by their male partners, relatives or assaulters this year, as against 399 in the previous year, the We Will Stop Femicide Platform, a women rights group that tracks homicides against women, reported on its website.

Women rights groups in Turkey have been pushing the government to take urgent precautions to protect women in need and strictly apply the Council of Europe Convention on Preventing and Combating Violence Against Women and Domestic Violence inked in Istanbul in 2011.

Additionally, the authorities have been urged not to reduce sentences given to harassers, murderers and assaulters of women.Zehra Zumrut Selcuk, Turkish minister of family, labor and social services, has introduced a coordination plan for combating violence against women, which includes 75 preventive measures.

“We believe that we will take serious steps to solve the problem with this emergency action plan,” Selcuk was quoted as saying by the state-run Anadolu Agency.