Sheikh Hasina arrives in New Delhi ahead of four-day visit 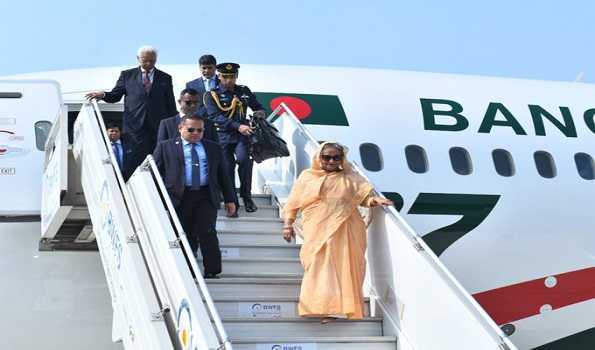 She is here at the invitation of Prime Minister Narendra Modi and during her visit a number of agreements are to be exchanged between the two sides.

This will be the second meeting of the two leaders following their earlier meeting on the sidelines of the UN General Assembly in New York on September 27.

Reports from Dhaka have suggested that during her interaction with Prime Minister Modi, Ms Hasina is likely to raise the Teesta water-sharing agreement and sharing of waters of other common rivers during their talks on October 5 here.

A framework for water-sharing of eight rivers may be also signed. The rivers include the Manu, Muhuri, Khowai, Feni, Gumti, Dharla, Dudhkumar and possibly Teesta.

India and Bangladesh share as many as 54 common rivers among them.

From the Bangladeshi point of view, the Rohingya crisis and the National Register of Citizens of India may also feature prominently in the talks.