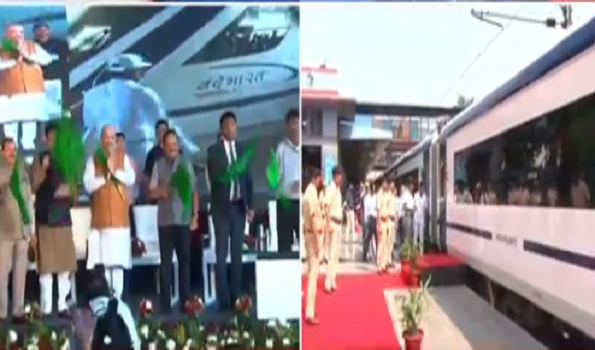 Mr Shah before flagging-off the sophisticated train said, ‘Before abrogation of Article 370, there were many obstacles in J&K’s path to development. In next 10 years, J&K will be one of the most developed states.’

‘On the occasion on Navratre, Jammu and Kashmir has got a gift today. Religious tourism holds a significant place for the development of the state. Every person of this country desire to have a glimpse and darshan of Mata Vaishno Devi,’ Mr Shah added.

He also said in 2014 after Mr Narendra Modi became the Prime Minister, every ‘yatra’ spot was linked properly.

On February 17, Vande Bharat between New Delhi to Varanasi was started, Mr Shah recalled, adding that ‘I am glad that under the able guidance of Piyush Goyal, Railways is progressing fast on the path of development and achieving its targets of speed, safety, among other things.’

Railway Minister Piyush Goyal said, ‘Railways will connect the country from Kashmir to Kanyakumari before August 15, 2022.’

This special train is entirely air-conditioned and has been designed in the shape of a bullet train.

This engineering marvel will have three stops- – Ambala, Ludhiana and Jammu Tawi.

Also, as compared to the first Train 18 which was flagged off by Prime Minister Narendra Modi, this train has more comfortable seats and pantry space.

It will depart from New Delhi railway station in the morning at 0600 Hrs and reach Katra at 1400 hrs.

On the same day, the train will leave from Katra at 1500 Hrs and reach New Delhi Railway station at 2300 hrs.

It will stop at the same stations on the return journey.