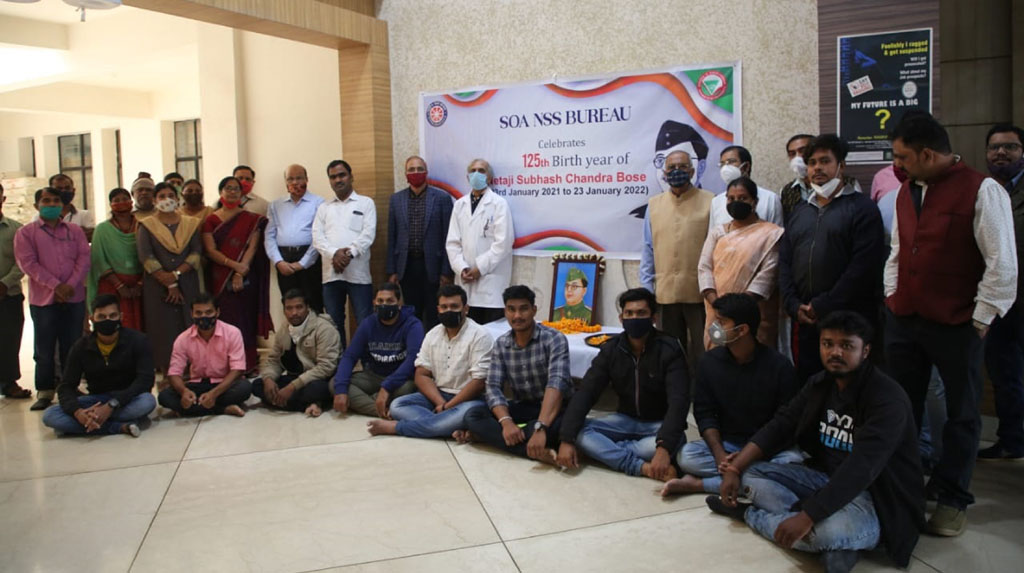 Bhubaneswar: Glowing tributes were paid to the memory of Netaji Subhash Chandra Bose on his 125th birth anniversary at the Siksha ‘O’
Anusandhan (SOA) here on Saturday with the Vice-Chancellor Prof. Ashok Kumar Mahapatra describing the freedom fighter as a model to be emulated by the younger generation.

“On this day, let us take a pledge to emulate the positive qualities demonstrated by Netaji during his life time as he battled for India’s freedom from the British rule,” Prof. Mahapatra said at a function held at SOA to mark his birth anniversary being celebrated as ‘Parakram Divas’.

Netaji’s year-long 125th birth year also commenced on the day of the anniversary. Netaji, who was born in Cuttack, was exceptionally brilliant and his thinking was perceived as radical by other leaders spearheading the freedom struggle.

“But while we are obsessed with our own interest and unable to think of others, he thought of the country and nothing else,” he said. Prof. Damodar Acharya, Chairman of the SOA Advisory Board and former Chairman of AICTE, said Netaji was a fearless leader who urged the countrymen to shed their blood for independence.

“Freedom is not given, it is taken. Blood alone can pay the price of freedom. Give me blood and I will give you freedom,” he quoted the nationalist leader as having said.

The university’s NSS Programme Coordinator Dr. N.K.Sharma gave an
introduction of the occasion mentioning that ‘Gandhi Katha’ and ‘Subhash Gatha’ lecture series will be organised jointly by the SOA NSS Bureau and SOA Wellness Centre in the coming months. SOA’s Dean (Students’ Welfare), Dr. Jyoti Ranjan Das proposed the vote of thanks.