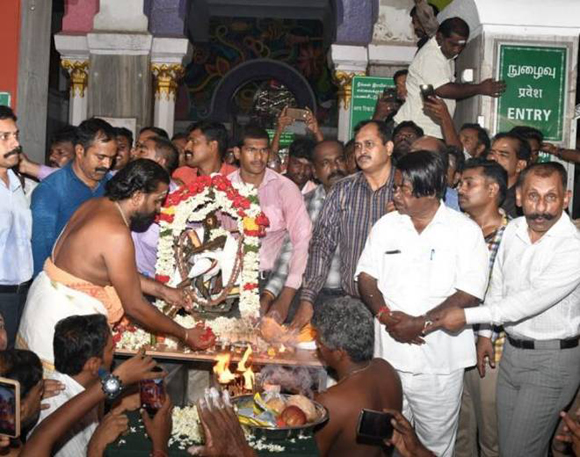 Thanks to the diligent efforts made by Idol Wing Special Officer A G Ponn Manickavel, a bronze idol of Lord Nataraja, stolen from a Tamil Nadu temple 37 years back, was brought back to Chennai on Friday morning after it was retrieved in Australia.

The two-and-a-half foot idol was stolen from the Kulasekaramudayar Aramvalartha Nayaki Amman temple in 1982 at Kallidaikurichi in the Southern Tirunelveli district and was smuggled out of the country.

Idol wing officials traced it to a museum in Australia and after following due process of law the idol was brought back to its home turf.  Ponn Manickavel brought the treasure from Delhi by the Tamil Nadu

Express to a rousing reception by beating of drums at the Chennai Central Railway station where a team of sivachariyaas and priests from the temple, besides hundreds of devotees, offered special poojas and Aarthis.

For close to two hours, the front yard at the Railway station resembled a temple as several devotees offered their worship to the idol which was brought in a procession. Later, the idol was taken by road to Kumbakonam, where it will be produced at a special court for idol theft cases after which it would be handed over to the temple.

The idol, along with three others, were stolen from the ancient temple in the year 1982. Of these artefacts, the Nataraja idol was traced to a museum in Australia.Australian authorities flew down and handed it over to the Special Officer and his team on Wednesday in New Delhi, from where it was brought by train today.  (UNI)