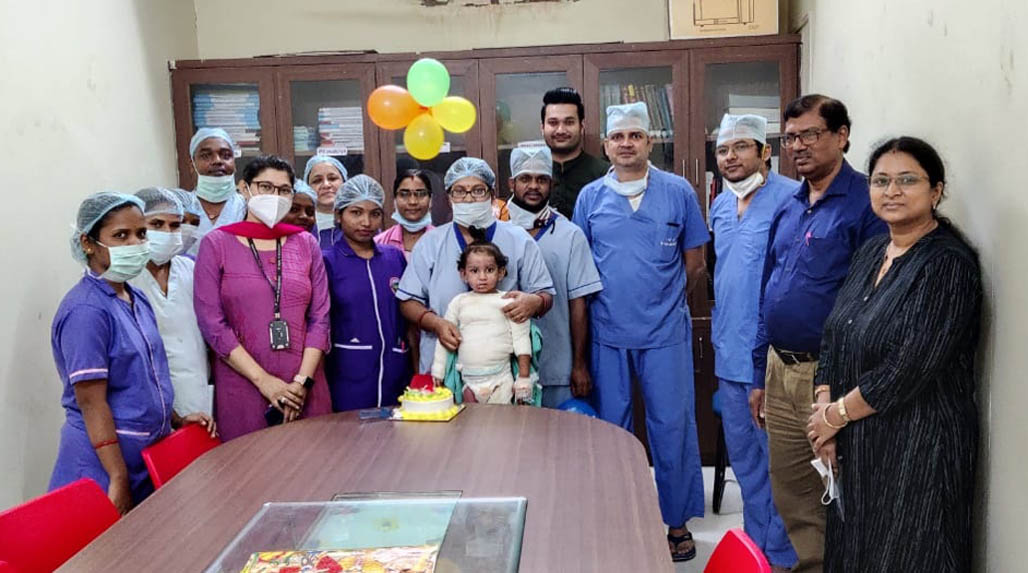 Bhubaneswar: Doctors at the Institute of Medical Sciences and SUM
Hospital here have virtually pulled out a two-year-old baby boy from the brink after he had suffered serious burn injuries when a pot of boiling water accidentally overturned on him a fortnight ago.

Bedanshu, who celebrated his second birthday in the department of Burns, Plastic and Reconstructive Surgery on Tuesday, had suffered 70 per cent burns when the accident occurred on November 9 at his home in Patrapada area of the city. The anguished parents rushed the howling baby to a local hospital and then to IMS and SUM Hospital in a critical condition.

The baby had suffered extensive burns on his face, both upper and lower extremities and trunk. A team of doctors led by Dr. Sushant Mishra, Professor and Head of the department of Burns, Plastic and Reconstructive Surgery initiated the treatment of the child. He was managed in the ICU and Collagen (artificial skin) was applied on him the next day supported by intensive pediatric care.

“It is difficult for even adults to recover so fast after suffering 70 per cent burns, but Bedanshu had shown rapid improvement. He is able to walk now, is watching videos and able to eat properly,” Dr. Mishra said adding the child could be discharged from the hospital shortly.

Bedanshu’s mother Gitanjali was extremely happy over the treatment provided to her child. “Dr. Mishra and his team have saved our son from the jaws of death. We never expected our child to recover so fast,” she said.

Stating that her husband Bipin Kumar Sahu was an auto driver, she expressed their gratefulness towards Dr. Sasanka Sekhar Mishra, Joint Registrar of SOA, who extended them all help and support in the treatment.

Dr. Mishra said IMS and SUM Hospital’s Burns, Plastic and Reconstructive Surgery unit also had the state’s only Skin Bank. Patients from all over the state were coming for treatment to the department, he said.