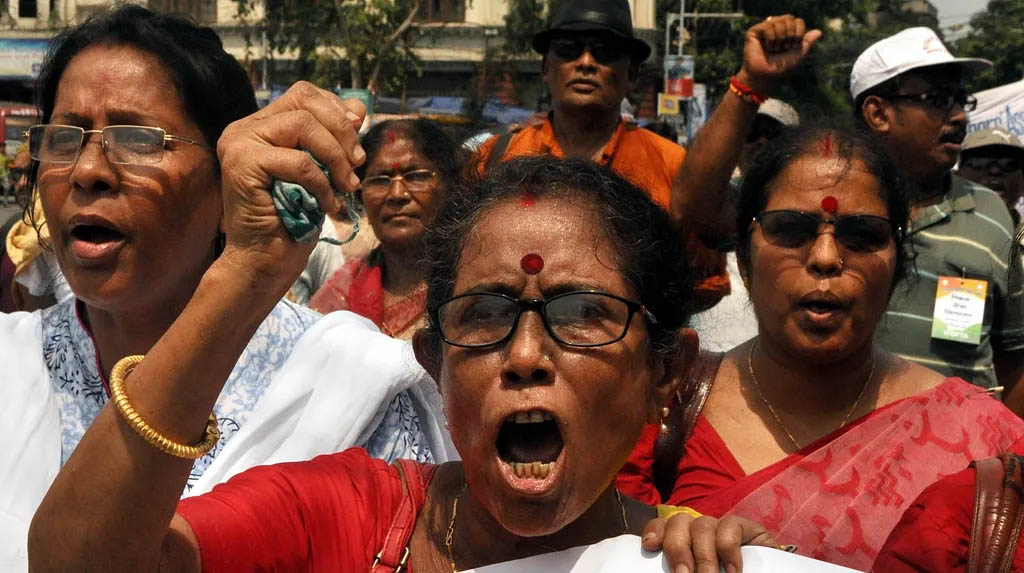 Agartala : A section of around 10,323 Tripura government teachers, facing termination of jobs due to a court verdict, on Sunday held a sit-in demonstration in Agartala demanding the setting up of alternative arrangements to protect their jobs, a leader of the teacher’s body said.

‘Amra 10,323’ (Us 10,323) organisation convener Dalia Das said that so far 50 teachers had “died of psychological trauma and anxiety”. She said the teachers, both men and women, held a mass demonstration on Sunday here demanding continuation of their jobs by the Tripura government.

“Tripura government should provide a job to the family members of those 50 teachers who had either committed suicide or died of psychological trauma and anxiety,” Das told the media.

Over 10,323 government teachers with graduate, post-graduate and under-graduate educational qualifications were inducted into Tripura government schools in different phases since 2010 when the Communist Party of India-Marxist (CPI-M)-led Left Front government was in power.

The recruitment process subsequently went to litigation and the Tripura High Court in 2014 terminated all the 10,323 teachers, saying that the selection criterion contained “discrepancies”.

Thereafter, Special Leave Petitions were filed in the Supreme Court by the then Left Front government and a section of teachers, while the apex court upheld the High Court verdict on March 29, 2017.

Following an appeal by the previous Left Front government, the apex court extended their services up to June last year.

After coming to power in March last year, the Bharatiya Janata Party (BJP)-led government had filed a fresh appeal in the Supreme Court In June last year, the Court granted them one-time final extension of their services till March 2020.

An official of the Education Department said that though a few hundred of these teachers have been absorbed in other government positions and through separate recruitment processes, including Teachers Eligibility Tests (TET), the majority of them face job losses.

These ad-hoc teachers had met the Education Minister Ratan Lal Nath and other Education Department officials and have held agitations on a number of occasions to protect their jobs, but all efforts have failed.

Prior to the 2018 Tripura assembly elections, these teachers had hoped that the ruling BJP would find a permanent solution for the 10,323 government teachers.

To appear for the TET, candidates ought to have 50 per cent marks in certain subjects and a Bachelor’s degree or Diploma in Elementary Education or Diploma in Education.

The HRD Ministry had earlier relaxed the minimum qualification norms for teachers, as notified by the NCTE, for Assam, West Bengal and Tripura.

Teachers recruitment and termination of their jobs by the courts was a key political issue ahead of the February 2018 Tripura assembly polls.