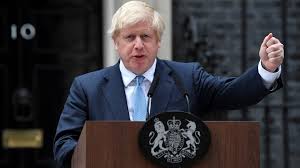 The highest court in the UK is set to make a historic ruling on whether Boris Johnson’s decision to suspend Parliament for five weeks was lawful.

Ministers say the suspension, or prorogation, is not a court matter, but critics argue it was intended to limit scrutiny of the PM’s Brexit plans. If the judgement – due at 10:30 BST – goes agains Johnson, Parliament could be reconvened immediately.
The government has said it will “abide by the ruling” of the Supreme Court, according to a BBC News report.

But  Johnson – who is in New York for a UN climate conference – has refused to rule out seeking to prorogue Parliament for a second time if the ruling goes against him.
Parliament is currently due to return on 14 October, with the UK scheduled to leave the EU on 31 October.

The three-day hearing at the Supreme Court dealt with two appeals – one from campaigner and businesswoman Gina Miller, the second from the government.
Miller was appealing against the English High Court’s decision that the prorogation was “purely political” and not a matter for the courts.

The government was appealing against the ruling by Scotland’s Court of Session that the prorogation was “unlawful” and had been used to “stymie” Parliament.
The challenge in the Scottish Court was brought by a cross-party group of MPs and peers led by the SNP’s Joanna Cherry. The BBC’s legal correspondent Clive Coleman said the Supreme Court had to resolve the two dramatically contradictory rulings.

He said if the justices ruled  Johnson’s advice to the Queen was unlawful, either because of an improper motivation or because of the effect of the decision – with legislation lost and Parliamentary scrutiny improperly denied – it could lead to calls for the PM to resign.

Asked whether he would resign in such circumstances,  Johnson told the BBC: “I’m going to wait and see what the judgement is,” adding that the government “fully respects the law and fully respects the judiciary”.

During the Supreme Court case, government lawyer Lord Keen QC said it was “forbidden territory” for judges to intervene on political arguments about when and how Parliament is suspended.

However, Lord Pannick QC, representing  Miller, argued the “exceptional length” of the prorogation was “strong evidence” that the prime minister’s motive was to “silence Parliament”, which he saw as an obstacle to his political aims.
Johnson said he was proroguing Parliament in order to hold a new Queen’s Speech on 14 October to outline the government’s legislative plans for the year ahead.
However, the timing has been controversial because it reduced the time Parliament was sitting ahead of the Brexit deadline, with MPs unable to put questions to ministers or scrutinise government legislation during the suspension. Later this morning, we will have a judgement handed down at the Supreme Court that will make political history – one way or the other.

The president of the Supreme Court, Lady Hale, does not do spoilers. So nobody other than the justices who will gather later know what is going to be said exactly.
The general expectation, however, is that the government will lose – which is very serious in and of itself – but we have no idea just how serious yet.
Will the court judge that the prime minister misled the Queen? That is about as serious as it gets.

Or will they want to draw a line in the sand and say this appears to have been disproportionate, but wont actually recommend any action? The Supreme Court must first decide whether prorogation is a matter for the courts – justiciable, in legal parlance – and if so, whether the decision of Mr Johnson to do it was lawful. If the government wins, then nothing changes – Parliament remains suspended until 14 October.

But things could get complicated if the justices decide Mr Johnson acted unlawfully.
In documents submitted to the court, the government said it could see three options if the court ruled against it – and in some scenarios, it might suspend Parliament all over again.

But Lord Pannick said all the judges needed to do was declare the suspension unlawful. The prime minister would not have to take any action and the Speakers of the Commons and Lords could decide how to proceed.