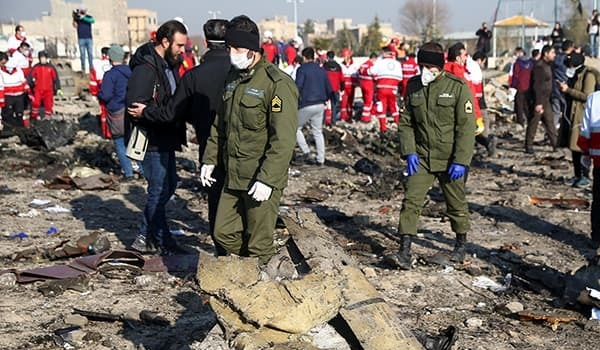 Tehran, Jan 11 : Iran on Saturday said the Ukrainian passenger plane which crashed outside Tehran earlier this week had flown close to a sensitive military site and been brought down due to human error “at a time of crisis caused by US adventurism”.

In a statement issued on Saturday, the General Staff of the Armed Forces of the Islamic Republic of Iran said that at the time of the accident on Wednesday, the forces had been on the highest alert, reports the Tehran-based Press TV.

Iranian state TV said that the plane flew close to a sensitive site belonging to Iran’s Revolutionary Guards, adding that those responsible would be held accountable, the BBC reported.

It further said that the Iranian armed forces mistook the US-made Boeing 737-800 for a hostile plane.

Saturday’s confirmation comes after Iran had previously rejected suggestions that one of its missiles brought down the the Kiev-bound Ukraine International Airlines (UIA) flight PS75, which crashed shortly after taking off from Tehran, killing all the 176 people on board.

A day after the crash, Canadian Prime Minister Justin Trudeau and US media reports, citing American and Iraqi intelligence officials, said that the airliner was shot down by an Iranian missile.

Trudeau also confirmed that his government had “evidence” indicating that the aircraft “was shot down by an Iranian surface to air missile”, although he added that it might have been unintentional.

These claims were rejected by Iranian government spokesman Ali Rabiei on Friday, saying that “these reports are a psychological warfare against Iran”.

“All those countries whose citizens were aboard the plane can send representatives and we urge Boeing to send its representative to join the process of investigating the black box”.

Wednesday’s crash occurred on the same day after Iran launched more than a dozen ballistic missiles at two US military bases in Iraq, in retaliation for the killing of Iranian Major General Qasem Soleimani in an American drone attack in Baghdad on January 3.