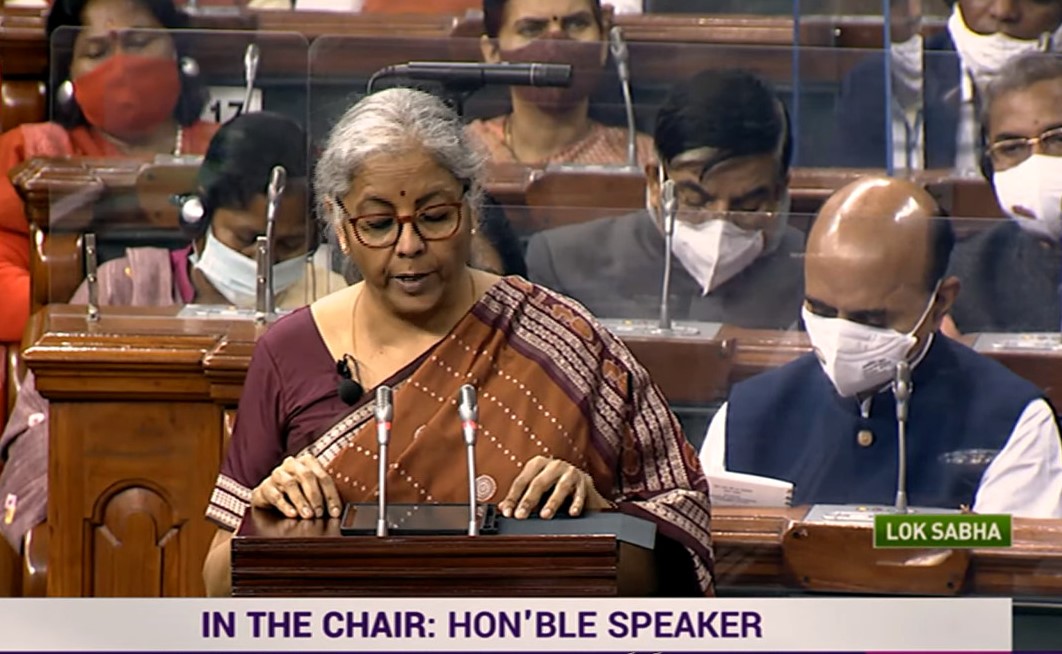 The Prime Minister in his Independence Day address had set-out the vision for [email protected] and by achieving certain goals during the AmritKaal, the government aims to attain the vision.

Sitharaman expressed her empathy for those who had to bear adverse health and economic effects of the pandemic. She said, with the accelerated improvement of health infrastructure in the past two years, the country is in a strong position to withstand challenges.

Budget 2022-23 reflects firm commitment of the Government to boost economic growth by investing in infrastructure development.

This is substantiated by increase in capital expenditure by 35.4 per cent that is over one lakh 96 thousand crore rupees over the Budgetary Estimate of  2021-22. Under the budget, the total resources being transferred to the States is 16 lakh 11 thousand seven hundred eighty one crore rupees.

Latest GDP estimates and movement in key economic activity indicators confirm strengthened momentum of India’s economic recovery. India’s nominal GDP is expected to grow by 11.1 per cent in the financial year 2022-23 over 2021-22, the Finance Minister said.

In the Railway sector, the Minister said, ‘One Station-One Product’ concept will be popularized to help local businesses and supply chains.  Multimodal connectivity between mass urban transport and railway stations will be facilitated on priority.

The Minister said, capacity in planning, design, financing (including innovative ways), and implementation management of the PM GatiShakti infrastructure projects will be ramped up.

Under PM DevINE Programme, 1500 crore rupees has been allotted.  The construction of Aizawl By-pass on Western Side will be done at a cost of 500 crore rupees.

The Minister said, multimodal Logistics Parks at four locations through PPP mode will be implemented in 2022-23.

National Digital Health Ecosystem to be rolled out and National Tele Mental Health Programme to be launched for quality counseling, the Minister said. Ms Sitharaman said two lakh Anganwadis to be upgraded to Saksham Anganwadi.

To give boost to digital banking by Post Offices, 100 per cent of post offices to be brought under the core-banking system.

In 2022, entire network of 1.5 lakh post offices will come on the core banking system enabling financial inclusion and access to accounts through net banking, mobile banking and ATMs. It will also provide online transfer of funds between post office accounts and bank accounts. This will be helpful, especially for farmers and senior citizens in rural areas, enabling inter-operability and financial inclusion.

To mark 75 years of independence, 75 Digital Banking Units (DBUs) will be set up in 75 districts across the country by Scheduled Commercial Banks. The move will ensure that the benefits of digital banking reach every nook and corner of the country in a consumer-friendly manner.

E-Passports using embedded chip and futuristic technology will be issued in 2022-23 to enhance convenience for the citizens in their overseas travel.

A battery swapping policy will be launched in view of the  constraint of space in urban areas for setting up charging stations for electric vehicles. The inter-operability standards to improve efficiency in the EV eco-system, will be formulated. The private sector will be encouraged to develop sustainable and innovative business models for ‘Battery or Energy as a Service’.

For efficient use of land resources, States will be encouraged to adopt Unique Land Parcel Identification Number to facilitate IT-based management of records.

‘One-Nation One-Registration Software’ will be promoted under NGDRS. It will be the uniform process for registration and ‘anywhere registration’ of deeds and documents.

Sitharaman said, government will set up a task force to recommend ways to realize the immense potential in animation, visual effects, gaming, and comic (AVGC) sector.

The Finance Minister said, a scheme for design-led manufacturing will be launched to build a strong ecosystem for 5G as part of the Production Linked Incentive Scheme.

The contract for laying optical fibre cable in all villages, including remote areas under Bharatnet project will be awarded through PPP in 2022-23.

Sitharaman said, the Special Economic Zones Act will be replaced with a new legislation to enable the states to become partners in ‘Development of Enterprise and Service Hubs’.

In order to reduce imports and promote Atma Nirbharta in equipment for Armed Forces, 68 per cent of the capital procurement budget will be earmarked for domestic industry in 2022-23. This is 10 percent more compared to 58 per cent during the current fiscal.

Defence R&D will be opened up for industry, startups and academia with 25 per cent of defence R&D budget earmarked. Private industry will be encouraged to take up design and development of military platforms and equipment in collaboration with DRDO and other organizations through SPV model.

With this investment taken together with the provision made for creation of capital assets through Grants-in-Aid to States, the ‘Effective Capital Expenditure’ of the Central Government is estimated at 10.68 lakh crore rupees in 2022-23, which will be about 4.1 per cent of GDP.

Government will allow world-class foreign universities and institutions in the GIFT City. They can offer courses in Financial Management, FinTech, Science, Technology, Engineering and Mathematics free from domestic regulations to facilitate availability of high-end human resources for financial services and technology.

Digital Rupee will be introduced using blockchain and other technologies. It will be issued by Reserve Bank starting 2022-23. Ms Sitharaman said, introduction of Central Bank Digital Currency (CBDC) will give a big boost to digital economy and lead to a more efficient and cheaper currency management system.

While dwelling upon the Direct Tax proposals contained in the Union Budget for the year 2022-23, Finance Minister Nirmala Sitharaman said, India is growing at an accelerated pace and people are undertaking multiple financial transactions. She announced a new provision to permit taxpayers to file an Updated Return on payment of additional tax.  This updated return can be filed within two years from the end of the relevant assessment year.

Giving relief to cooperative societies, the Finance Minister proposed to reduced Alternate Minimum Tax from eighteen and one half per cent to fifteen per cent.

It is also proposed to reduce the surcharge on co-operative societies from present 12 per cent to seven per cent for those having total income of more than one crore and up to 10 crore rupees.