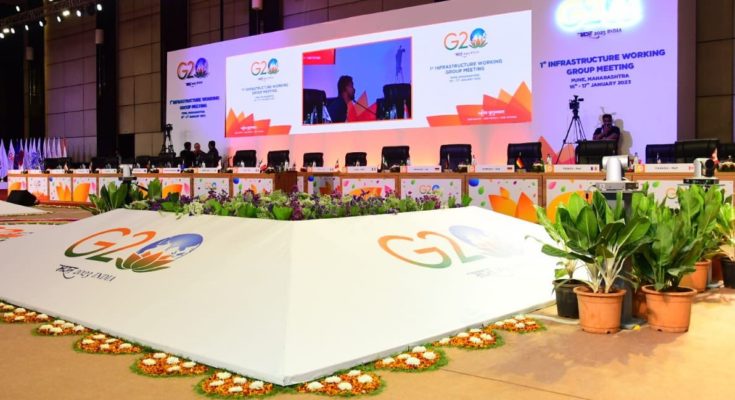 The Department of Economic Affairs, Ministry of Finance, Government of India will host the two-day IWG meetings, along with Australia and Brazil as the co-chairs. The first IWG meeting in Pune would be attended by 65 delegates across the G20 membership, invitee countries and International Organizations.

The Indian G20 Presidency’s theme of ‘One Earth, One Family, One Future’ sets the tone for the 2023 Infrastructure Agenda under the 2023 Indian G20 Presidency. The theme underlines the message of equitable growth and aptly ties up with the central agenda of the discussions which is building resilient, inclusive and sustainable urban infrastructure. The theme also aligns with the work done under the previous presidencies on Infrastructure Agenda.

In the Pune meeting, discussions will focus on the agenda for the Infrastructure Working Group under the Indian Presidency. The flagship priority to be discussed in this meeting is “Financing Cities of Tomorrow: Inclusive, Resilient and Sustainable”. The theme will focus on various facets of making cities economic centres of growth, financing urban infrastructure, building future-ready urban infrastructure, directing fiscal investments for unlocking private financing for energy-efficient and environmentally sustainable infrastructure and mitigating social imbalances.

The G20 meeting is being accompanied by a number of ‘Jan Bhagidari’; (Domestic Outreach) initiatives involving lectures on G-20, seminar on Making Cities Future Ready and Importance of Urban Development, G20 Cyclothon and model G20 discussion in the educational institutions. As part of these events, more than 300 people including Municipal Commissioners from Andhra Pradesh, Punjab, Tamil Nadu, Kerala, Telangana, Gujarat, Maharashtra, Chhattisgarh, Himachal Pradesh etc., urban experts and industry representatives from all over the country participated in a national level seminar on Urban Infrastructure in Pune on 13th January 2023. The initiative aims to involve people from all walks of life in the whole discussions happening around the G20 themes.

During India’s G20 Presidency, the G20 Infrastructure Working Group will be used as a forum to discuss the challenges that cities face and opportunities that cities will bring in the near future and chart out a future course that makes cities more live able.

Over the course of next two days, various official meetings and cultural programmes are scheduled. On 16th January, the Indian Presidency will flag off the first meeting of the Infrastructure Working Group. In the first half, the IWG delegated will undertake a series of official meeting and discuss the 2023 Infrastructure Agenda. After lunch, the delegates would be visiting the Pune University for Tree Plantation, followed by a High- Level workshop on “Financing for the cities of Tomorrow”. The day will be concluded with Gala/ Networking Dinner, and will mark closure of Day 1 meetings and events.

On 17th January 2023, the IWG will deliberate on four sessions, followed by the Vote of Thanks to the delegates. The two-day meetings in Pune will be concluded by a Farewell dinner.

A part from the formal discussions, the delegates will be able experience the rich culture and beautiful landscapes of the city. The Department has arranged for optional excursions such as Pune Heritage Walk, City Tour and a Trip to Mahabaleshwar.

The Ministry of Finance will steer the G20 Infrastructure agenda to ensure that the G-20 acts as a global prime mover to envision new ideas and accelerate collective action.