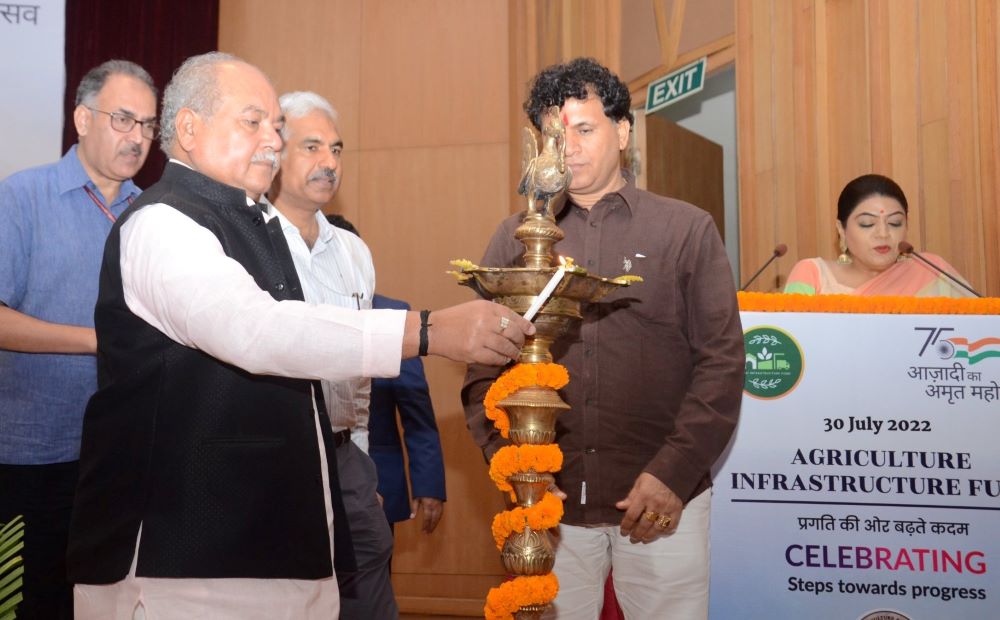 “In the AatmaNirbhar Bharat campaign, more than Rs. 1.5 lakh crore are being invested in Agriculture and allied sectors. This should be used by the State Governments and banks together in the development of the Agriculture sector.

This is a great opportunity for the States to fill the gaps in funding agricultural infrastructure. State governments should use it to make Agriculture strong and prosperous, which will make the country develop at a faster pace,” he said.

Shri Tomar said that agriculture sector is important for India. “The primacy of Agriculture has proved itself from time to time. Agriculture helped India come out of the Covid crisis and made a significant contribution to the economy at a time when other sectors were badly affected. Today India is one of the leading countries in the world in terms of agricultural produce,” said Shri Tomar.

“If you want to move forward in this field, then you have to identify the challenges and overcome them. There are 86 percent small farmers in the country, who own less than two hectares of land, while 55 to 60 percent of the country’s population is dependent on Agriculture.

In such a situation, continuous efforts are being made for the last eight years under the leadership of the Prime Minister Shri Narendra Modi to upgrade the Agriculture sector. KCC has been increased from Rs 7 lakh crore to Rs 16.5 lakh crore. Banks are offering simple loan facility. Along with this, work is being done to form 10,00 FPOs so that the area under cultivation is increased, the quality of production is improved and the farmers can get good price for their produce,” he added.

Speaking on the occasion, Minister of State for Agriculture and Farmers Welfare, Shri Kailash Choudhary dwelled on the role of Banks and Government agencies in empowering farmers and make the nation self-sufficient. Prime Minister Modi took a bold step by paving easy farm loans as he scrapped the need for a collateral, saying the Government of India will stand guarantee, he said.

In his address, Secretary, DA&FW, Shri Manoj Ahuja, called for improved monitoring to make the loan process faster in line with the promptness of the portal based loan approval mechanism.

Joint Secretary, DA&FW, Shri Samuel Praveen Kumar made a detailed presentation on the two year-journey of AIF. While showering accolades on the Bankers and State Governments for their contribution, he urged them to reinvigorate their teams to make the on-going NOBOL (Nationwide One Branch One Loan) Campaign a grand success.

On the occasion, Shri Tomar gave away the awards under various categories to honour Banks and State Governments for their valuable contribution in financing under the Central Sector Scheme of ‘Agriculture Infrastructure Fund’.