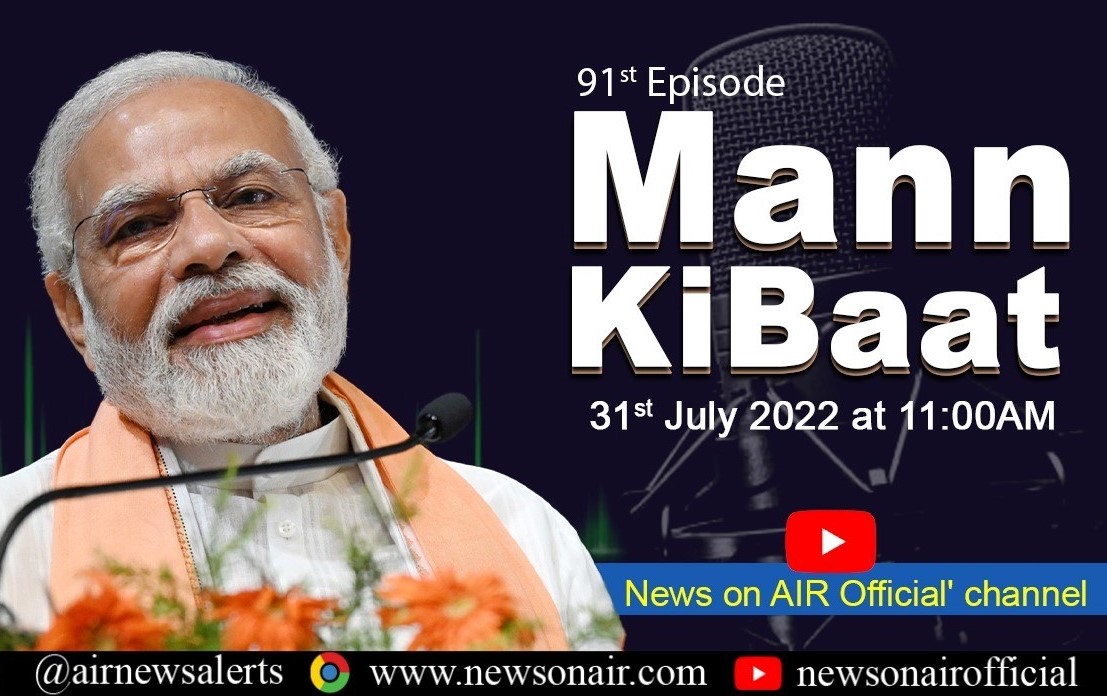 New Delhi: Prime Minister Narendra Modi today expressed happiness that Azadi Ka Amrit Mahotsav has taken the form of a mass movement. Addressing the nation in his Mann Ki Baat programme on All India Radio, Mr Modi highlighted that people from all walks of life and every section of the society are participating in different programs connected with it. He said this 91st episode of Mann Ki Baat is very special as India will soon complete 75 years of her independence.

The Prime Minister called the listeners lucky as they were born in a free India. He added that this present day would have been unimaginable had people been born in the era of slavery. He said, people who had lived through those times must have yearned from freedom from slavery and subjugation. He said, millions of countrymen fought against it and made sacrifices for the sake of freedom.

Today is the martyrdom day of Shaheed Udham Singh. The Prime Minister offered tributes to him as well as all such other great revolutionaries who sacrificed themselves for the country. He spoke about an event held under Azadi Ka Amrit Mahotsav in Meghalaya earlier this month where people remembered the brave warrior of Meghalaya U. Tirot Singh on his death anniversary.

Tirot Singh fiercely opposed the British conspiracy to control the Khasi Hills and destroy the culture there. A carnival was organized as part of the event, in which the culture of Meghalaya was depicted in a beautiful manner. Mr Modi also mentioned a unique campaign in Karnataka named Amrita Bharathi Kannadarthi. Under this, programs related to the Azadi Ka Amrit Mahotsav were organized at 75 places in the state.

The Prime Minister said that an interesting endeavour has been undertaken this month, called Azadi Ki Railgadi Aur Railway Station. The objective of this effort is to let people know the role of Indian Railways in the freedom struggle. Mr Modi pointed out that Gomoh Junction in Jharkhand is now officially known as Netaji Subhas Chandra Bose Junction Gomoh.

This is because at this very station, Netaji was successful in dodging British officers by boarding the Kalka Mail. He also said that the names of bravehearts such as Ram Prasad Bismil and Ashfaq Ullah Khan are associated with Kakori Railway Station near Lucknow. He went on to say that Vanchi Maniyachchi Junction in Thoothukudi district of Tamil Nadu is named after Tamil freedom fighter Vanchinathan. This is where Vanchi, who was 25 years of age, had punished a British collector for his actions.

Seventy five such railway stations have been identified spread over 24 states across the country. Mr Modi urged the countrymen to visit one such historical station in their vicinity. He urged the students and teachers of nearby schools to visit the station and learn more about these events.

Prime Minister spoke about the Har Ghar Tiranga campaign which is being held under the Azadi ka Amrit Mahotsav. He asked listeners to become a part of this movement, and hoist the Tricolour or adorn their homes with it from 13th to 15th August. He said the Tricolor connects and inspires people to do something for the country.

He also suggested that people can use the Tricolour as social media profile picture from the 2nd of August to the 15th of August. He said the 2nd of August has a special connection with the Indian flag. This day is the birth anniversary of Pingali Venkaiah who designed the national flag. He also remembered the great revolutionary Bhikaji Cama whose role in shaping the Tricolor has been very important.

The Prime Minister stated that the biggest message of Azadi Ka Amrit Mahotsav is that everyone should follow their duty with full devotion. He said, Amrit Kaal of the next 25 years is also Kartavyakaal, a period of duty for every countryman.

Touching upon the subject of healthcare, Mr Modi said the fight against Corona is still on and the increasing interest in Holistic Healthcare has helped everyone to tackle the pandemic. He emphasised that Indian traditional methods are useful in this and AYUSH has played an important role, at the global level. There is a growing interest in Ayurveda and Indian medicine around the world.

He stated that Ayush Exports have witnessed a record growth and many new start-ups are emerging in this sector. He talked about Global Ayush Investment and Innovation Summit which was held recently. Mr Modi was pleased to note that investment proposals of about ten thousand crore rupees have been received during the Summit. He also said that during the pandemic, research has increased on medicinal plants and many research studies are being published on this. He termed it a good start.

Sharing success stories, the Prime Minister threw light on how farmers are performing wonders in the production of honey. In Yamunanagar of Harayana, beekeeper Subhash Kamboj is engaged in beekeeping using about two thousand boxes.

His honey is supplied across many states. Vinod Kumar from Palli village of Jammu, undertook training in rearing the queen bee last year and is presently earning 15 to 20 lakh rupees annually. Mr Modi mentioned another farmer from Karnataka, Madhukeshwar Hegde, who availed subsidy from the Government for 50 bee colonies. Today, he possesses over 800 colonies, and sells tons of honey.

Mr Modi stressed that honey has been given a lot of importance in Ayurveda. Honey has been described as an elixir. He said there are so many possibilities in honey production today that even the youth pursuing professional studies are making it a source of self-employment.

Prime Minister gave the example of one such youth – Nimit Singh of Gorakhpur, Uttar Pradesh. Nimit who has a B.Tech, started honey production and got his own lab set up in Lucknow for quality check. Nimit is now earning well from honey and Bee Wax, and is also training farmers. Mr Modi expressed happiness that the export of honey from India has also increased. He gave the credit to campaigns like National Beekeeping and Honey Mission, and the hard work of farmers.

The Prime Minister highlighted various melas and fairs held across the country in this edition of Mann Ki Baat. He spoke about the Minjar Mela of Chamba which is going on right now. Minjar Mela is celebrated when flowers bloom on the maize.

Mr Modi said fairs have been of great cultural importance in the country as fairs connect people and hearts. He said when Kharif crops ripen after the rains in Himachal in September, Sari or Sair is celebrated in Shimla, Mandi, Kullu and Solan. He also mentioned Jagra fairs held in September when Bisu songs are sung after invoking the deity of Mahasu. He added that the awakening of Mahasu Devta takes place in Himachal at Shimla, Kinnaur and Sirmaur and simultaneously in Uttarakhand.

The Prime Minister also emphasised on the many traditional fairs of tribal societies in different states. Some of these fairs are associated with tribal culture, while some are organized in connection with tribal history and heritage. He gave the example of the four-day Samakka-Saralamma Jatara Fair in Medaram of Telangana. This fair is called Mahakumbh of Telangana and is celebrated in honor of two tribal women heroes – Samakka and Saralamma. It is a big center of faith for the Koya tribal community not only in Telangana, but also in Chhattisgarh, Maharashtra and Andhra Pradesh.

Similarly, Prime Minister said the Maridamma fair in Andhra Pradesh is also a big fair connected with the beliefs of the tribal society. The Maridamma fair runs from Jyeshtha Amavasya to Ashadh Amavasya and the tribal society associates it with Shakti worship. The people of Garasiya tribe in Rajasthan organize Siyawa ka Mela or Mankhan Ro Mela on Vaishakh Shukla Chaturdashi.

Mr Modi said the Mawli Mela of Narayanpur of Bastar in Chhattisgarh is also very special. He added that the Bhagoria Mela of Madhya Pradesh is also very famous. He added that many fairs like Tarnetar and Madhopur are very famous in Gujarat. He said such old links of the society are important to strengthen the spirit of Ek Bharat- Shreshtha Bharat. He asked the youth to join them and share the pictures on social media. He informed that the Culture Ministry is going to start a competition in the next few days where those who send the best pictures of the fairs will be rewarded.

Mr Modi shared the success stories of the Indian Toy industry and gave the credit to the youth, Start-ups and Entrepreneurs. He said that when it comes to Indian toys, the echo of Vocal for Local is being heard everywhere. He stated that the number of toys coming from abroad in India is continuously decreasing. Earlier, toys worth more than three thousand crore rupees used to come from outside. Now, their import has reduced by 70 percent. Mr Modi expressed delight India has exported toys worth more than two thousand six hundred crore rupees to foreign countries during this Corona period. Earlier, only toys worth 300 to 400 crore rupees used to go out of India. He lauded India\’s toy sector for proving its mettle by transforming itself. Indian Manufacturers are now making toys based on Indian Mythology, History and Culture. He added that toy clusters and small entrepreneurs are getting a lot of benefit from it. Indian Toy manufacturers are also working closely with the world\’s leading Global Toy Brands.

Mr Modi gave several examples including a start up in Bangalore named Shumme Toys that is focusing on eco-friendly toys. In Gujarat, Arkidzoo Company is making AR-based Flash Cards and AR-based Storybooks. Pune-based company, Funvention is engaged in kindling the interest of children in Science, Technology and Maths through Learning, Toys and Activity Puzzles.

Mr Modi said this entire month has been full of action for sportspersons. He hailed PV Sindhu who won her first title of Singapore Open recently. He said Neeraj Chopra also continued his excellent performance and won the silver medal in the World Athletics Championship. He added that at the Ireland Para Badminton International as well, Indian players have boosted the glory of the country by winning 11 medals. Indian players also performed well in the World Cadet Wrestling Championship held in Rome.

He said athlete Suraj has done wonders in the Greco-Roman event by winning the Gold Medal of Wrestling in this event after a long gap of 32 years. He said it is a great honor for India to host the 44th Chess Olympiad in Chennai. This tournament commenced on the 28th of July. Commonwealth Games also began in the UK on the same day. Mr Modi extended his best wishes to all the players and athletes representing India at the Commonwealth Games. He expressed happiness that India is going to host the FIFA Under 17 Women\’s World Cup as well in October.

The Prime Minister concluded his address by congratulating the students of Class 10 and 12 whose results were declared earlier this month.