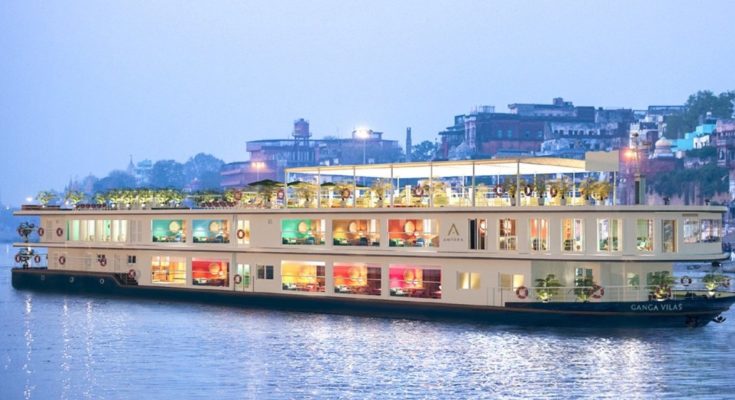 MV Ganga Vilas: The Prime Minister, Shri Narendra Modi flagged off the World’s Longest River Cruise-MV Ganga Vilas and inaugurated the Tent City at Varanasi via video conferencing today. He also inaugurated and laid the foundation stones for several other inland waterways projects worth more than Rs. 1000 crores during the event.

Addressing the gathering, the Prime Minister hailed Lord Mahadev and greeted everyone on the auspicious occasion of Lohri. The Prime Minister emphasised charity, faith, tapasya and faith in our festivals and the role of rivers in them. This makes the projects related to river waterways all the more significant, he said.

He pointed out that the longest river cruise from Kashi to Dibrugarh is being flagged off today which will bring to the fore, places of tourism in North India on the world tourism map. He said other projects being dedicated today in Varanasi, West Bengal, Uttar Pradesh and Bihar, Assam worth 1000 crore will give a push to the tourism and employment potential in eastern India.

Underlining the central role of river Ganga in the life of every Indian, the Prime Minister lamented that the area around the banks lagged behind in development in the post-independence period thereby leading to a massive exodus of population from this area.

The Prime Minister elaborated on a twin approach to address this unfortunate situation. On the one hand, the campaign to clean Ganga was undertaken through Namami Gange and ‘Arth Ganga’ was taken up on the other. In ‘Arth Ganga’ steps have been taken to create an environment of economic dynamism in the states from where Ganga passes.

Directly addressing the tourists from foreign countries who are traveling on the maiden journey of the cruise, the Prime Minister said, “Today India has everything and a lot beyond your imagination.” He further added that India can only be experienced from the heart as the nation has welcomed everyone with open hearts irrespective of region or religion, creed or country and welcomed tourists from all parts of the world.

Throwing light on the experience of the river cruise, the Prime Minister informed that it has something special for everyone. He added that those seeking spirituality will cover destinations like Kashi, Bodh Gaya, Vikramshila, Patna Sahib and Majuli, tourists looking out for a multinational cruise experience will get the opportunity to via Dhaka in Bangladesh, and those wanting to witness the natural diversity of India will cross through Sundarbans and the forests of Assam.

Observing that the cruise will pass through 25 different river streams, the Prime Minister said that this cruise has significant importance for those who have a keen interest in understanding the river systems of India.

He also mentioned that it is a golden opportunity for those who want to explore the myriad culinary and cuisines of India. “One can witness the extraordinary amalgamation of the heritage of India and its modernity on this cruise”, the Prime Minister remarked as he shed light on the new era of cruise tourism where new employment opportunities will be created for the youth of the country.

“Not just foreign tourists but Indians who traveled to different nations for such an experience can head towards North India now”, the Prime Minister said. He also informed that similar experiences are being readied in other inland waterways of the country to give a boost to cruise tourism while keeping in mind the budget as well as the luxury experience.

The Prime Minister also mentioned that India is entering into a robust phase of tourism as with a growing global profile, curiosity about India is also increasing. That is why, said the Prime Minister, in the last 8 years various steps were taken to expand the tourism sector in the country.

Places of faith were developed on priority and Kashi is a live example of such efforts. With improved facilities and the rejuvenation of Kashi Vishvanath Dham, Kashi has seen a huge increase in the number of visiting devotees. This has given a massive boost to the local economy. The New Tent City, infused with modernity, spirituality and faith, will provide a novel experience to the tourists.

Concluding the address, the Prime Minister remarked on the continuous development process of developing waterways in India and said, “Strong connectivity is essential for building a developed India.” The Prime Minister expressed the belief that the river of India will give new heights to waterpower and trade and tourism of the country and wished a pleasant journey to all the cruise passengers.