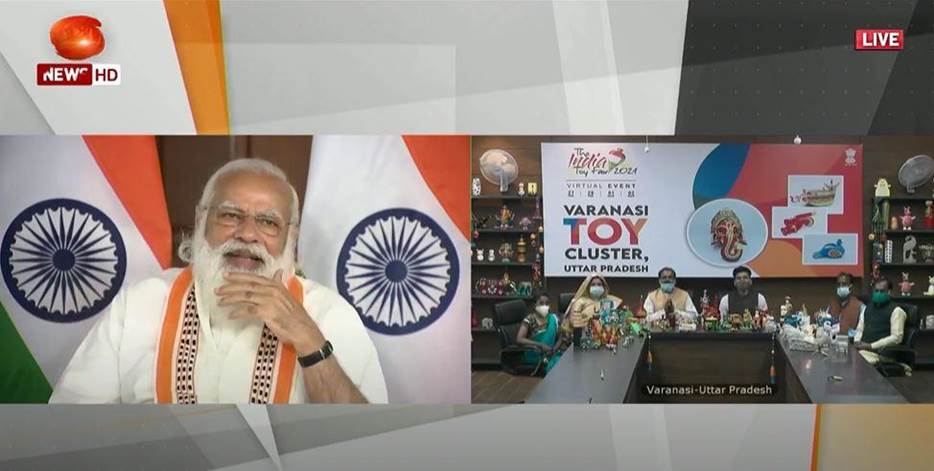 The Toy Fair is being held from 27th February to 2nd March with above 1,000 exhibitors  participating.

The Prime Minister interacted with toy makers from Channapatna in Karnataka, Varanasi in Uttar Pradesh and Jaipur in Rajasthan.

Through this Toy Fair, the Government and the Industry shall come together to discuss how India can be made the next global hub for manufacturing and sourcing of toys by way of attracting investments in the sector and promoting exports, officials stated.

Addressing the event, the PM called for bringing out the hidden potential of the toy industry in India and to create an identity for it as a big part of the campaign for AatmaNibhar Bharat.

Toys made in India here contributed to the all-round development of children, he acknowledged.

He said the way reuse and recycling have been a part of the Indian lifestyle, it is also seen in our toys. Most Indian toys are made from natural and eco-friendly items, the colors used in them are also natural and safe.

These toys also connect the mind with our history and culture and are also helpful in social mental development and cultivation of Indian outlook, Modi maintained.

He appealed to the country’s toy manufacturers to make toys that are better for both ecology and psychology. He asked them to use less plastic in toys and to use such things that can be recycled.

The PM stated that India has now graded the toy industry in 24 major sectors. The National Toy Action Plan has also been prepared. It has included 15 ministries and departments to make these industries competitive and to conquer global market.