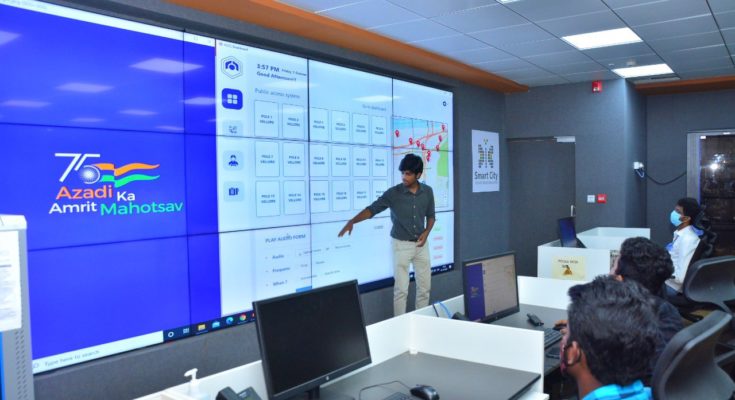 New Delhi: Data Smart Cities Initiative awarded the Digital India Awards 2022 under ‘Data Sharing and Use for Socio Economic Development’ category. The initiative is a key step in creating a robust data ecosystem that enables evidence-based decision-making in cities.

The Smart Cities Mission, Ministry of Housing & Urban Affairs won the Platinum Icon in the Digital India Awards 2022 for their initiative “DataSmart Cities: Empowering Cities through Data” under the ‘Data Sharing and Use for Socio Economic Development’ category. The award was announced on 19th December 2022. The DataSmart Cities Initiative is a key step in creating a robust data ecosystem that enables evidence-based decision-making in cities.

The Digital India Awards (DIA) is a prestigious National competition that seeks to encourage and honour innovative digital solutions by government entities in realising the Digital India vision. The category ‘Data Sharing and Use for Socio Economic Development’ emphasizes on sharing of Government Data by Ministries/Departments/Organizations, States, Cities and ULBs to create a vibrant data ecosystem in the country for analysis, decision-making, innovation, services, economic development and public good.

The Awards instituted in 2009 are one of a kind in India for honouring the efforts of different Government entities in the digital realm. These are conducted by the National Informatics Centre (NIC) under the Ministry of Electronics & Information Technology (MeitY). The seventh edition of Digital India Awards (DIA) is being held in 2022.

Digital India Awards (DIA) presents an opportunity to bring to the fore digital initiatives being adopted to transform India into a digitally empowered society & knowledge economy. These awards are instituted under the aegis of National Portal of India to encourage and honour innovative digital solutions by government entities at all levels. DIA 2022 aims to inspire and motivate not only government entities but also start-ups in fulfilling the Digital India vision.

Detailed information can be obtained from https://digitalindiaawards.india.gov.in/.

Data Smart Cities initiative aims to harnesses the power of data for better governance in India’s 100 Smart Cities. Based on a ‘People, Platform, Process’ strategy, this initiative is leading to convergence of Ministry’s efforts for performance management, empowerment of communities, and research, co-creation & open innovation.

To leverage and utilize valuable data being generated in cities via network of intelligent devices and systems, the Smart Cities Mission, MoHUA launched the DataSmart Cities (DSC) Initiative across 100 Smart Cities. The DSC uses a three-pronged approach – People, Process, Platforms – to imbibe a culture of data awareness and data usage in city functioning.

The program has institutionalised a Data Ecosystem in cities through 100 City Data Offices and more than 50 Data Policies. The Smart Cities Open Data Portal has transformed from zero to all 100 Smart Cities now publishing open datasets and contributing to data blogs and visualizations, leading to 1.2+ lakh downloads and ~6 lakh views. This initiative has led to generation of more than 180 innovative, scalable, and replicable use cases in collaboration with various stakeholders that are being utilized by cities for better functioning and citizen engagement vis. Vadodara Medical Green Corridor, Surat Real-time Bus Seat Occupancy, Agartala Smart Traffic Control, among others.

The success of this initiative in 100 Smart Cities has a potential to create a virtuous cycle of improvement, with transformational impact of data on all cities in India.