Thousands of farmers thronged the mega agricultural fair in Morena 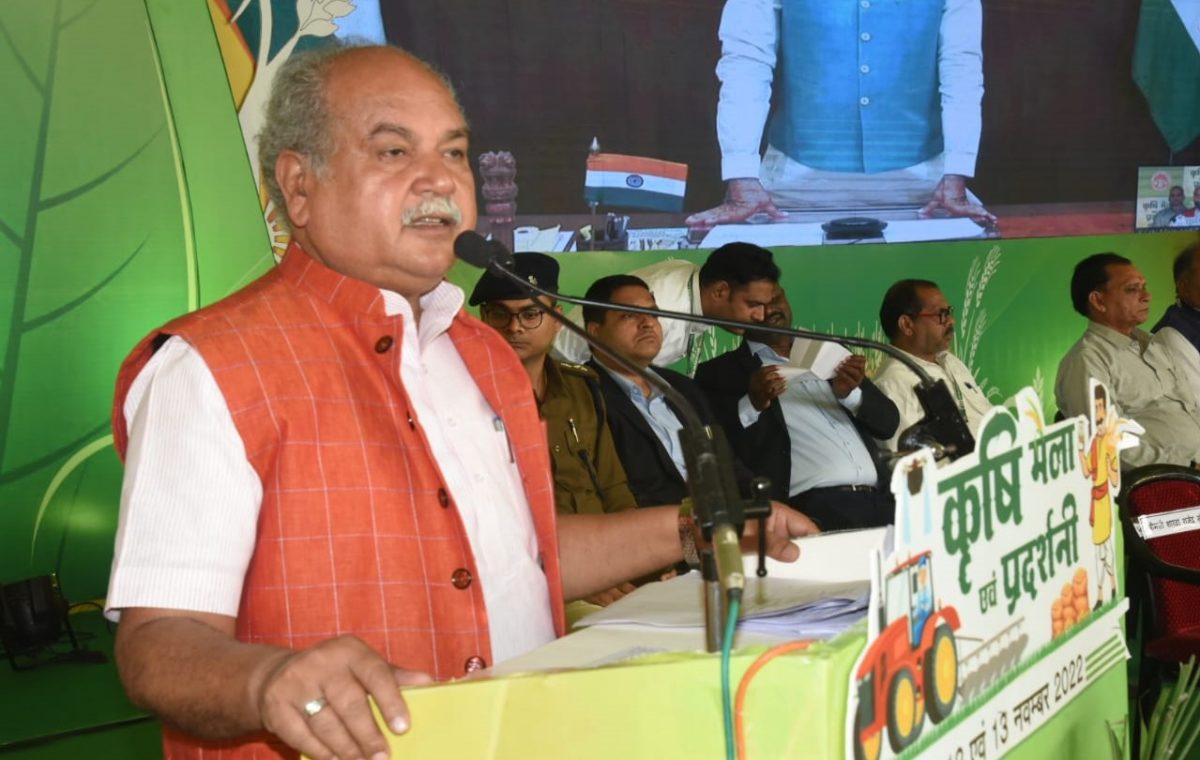 New Delhi: Thousands of farmers thronged the three-day mega agriculture fair, exhibition and training programmes, organized by the Union Ministry of Agriculture and Farmers Welfare in collaboration with the Madhya Pradesh government and district administration, at Morena, Madhya Pradesh on the second day today.

On this occasion, Chief Guest, Governor of Gujarat, Shri Acharya Devvrat, addressing the farmers over video conference, said that natural farming system paves the way for prosperity for the farmers. Just as plants grow naturally in the forest, in the same way, farmers can increase the fertility of their land along with increasing production by cultivating cow-based natural method in the fields.

On this occasion, Union Minister Shri Tomar launched the NABARD project at Pahargarh for the development of tribals of the area, as well as laid the foundation stone of a hitech Nursery and Tissue Culture Lab for organic seed farm in Morena.

Explaining the importance of natural farming to the farmers who came to the mega fair-exhibition organized at the Dr. Ambedkar Stadium, Morena, the Governor of Gujarat, Shri Devvrat said that today the Government of India spends about Rupees 2.5 lakh crore annually on fertilizer subsidy, while this amount could be used for other development works in the country. If farmers adopt natural farming, then it will also avoid the damage caused by chemical farming. He said that it is also possible to increase the income of farmers through natural farming and it also saves water up to 70 percent.

Special guest Union Minister Shri Jyotiraditya Scindia said that the farmer feeds the people of the whole country, and there can be no work greater than this. Shri Scindia said that today India’s flag is flying all over the world, and farmers are the main reason for it. He said that the budget of Agriculture Ministry, which used to be Rs. 21,000 crore till 2013-14, has now increased almost six times to Rs. 1.24 lakh crore.

Shri Scindia said that infrastructure is being developed for the farmers, while the farmers are increasing the production. Record production of food grains and horticulture is being done in the country as compared to the year 2013-14, whereas today India is the largest producer of milk in the world and stands second in floriculture and third in food grains production.

Special guest, Union Minister of State for Agriculture, Shri Choudhary said that several major initiatives have been undertaken for the welfare of farmers and to raise their living standard. Farmers will have to engage with new technologies to increase their income.

The government is also promoting natural farming to keep people healthy and provide nutrition. To make the country AatmaNirbhar, farmers have to be made self-reliant. Today, farmers are getting simple loans at low interest rate, which has reduced their problems. The government has taken several measures, including the formation of 10,000 new FPOs, especially for small-holding farmers.

During the three-day mega Krishi Mela, farmers took advantage of various training sessions throughout the day. There will be training-sessions tomorrow also. In today’s main programme, the Union Minister Shri Tomar inaugurated a project of NABARD at a cost of Rs.3.75 crore for the development of tribals and distributed toolkits to tribal families.

Shri Tomar said that this would change the standard of living of the tribals and their income would increase. Pahargarh in Morena district has been selected by NABARD for the tribal development project as most of the tribals living in this area come from the Sahariya community. The Government of India has recognized the Sahariya tribe as a primitive tribe. Under water resource development project, besides tubewells, activities such as pump sets, drips, plastic drums, farm ponds, pipes, etc. have been approved. Along with this, horticulture and forestry saplings will be distributed.

Activities under soil and water conservation and 25 units each of poultry and goat rearing have also been approved. Awareness programmes for Self Help Group women, income generating activities like mushroom cultivation, bee keeping, papad making, awareness programmes on cleanliness and bank linkage etc. activities have been sanctioned under the development of women.

Approval has also been given for health camps, livestock health camps, vegetable gardens and formation of FPOs etc. The objective is the integrated development of tribal families and creating a new model for their sustainable income generation based on participation and utilization of capacities of the area and tribal needs. Capacity building by creating tribal institutions at the village level, which can participate in policy making for the communities and improve their socio-economic status, are also among its aims.

Revamping the land in the rugged area by the Union Agriculture Ministry, Shri Tomar laid the foundation stone of a Hi-Tech Nursery and Tissue Culture Lab for an organic seed farm operated by the National Seed Corporation at Morena. For this, Madhya Pradesh State Government has allotted 885.34 hectares of land in Gadora, Jakhauna, Rithora Khurd and Gorkha villages to the Union Agriculture Ministry.

Approval has been given to set up the tissue culture lab at a cost of Rs. 2.5 crore under the MIDH. This lab will produce around 30 lakh saplings a year and will help revolutionize the commercial agriculture sector by enabling large scale propagation of high yielding and disease free plants. Plants like Bamboo, Banana, Strawberry, Lemon Grass, Citronella etc. will be produced in the lab. NSC Director Mr. Sahu gave detailed information about this.

In the programme, Union Minister Shri Tomar gave Rs. 2 crore to the women of Sitlamata Self Help Group. Shri Tomar also handed over a cheque towards short-term loan amount of Rs. 4.56 lakh provided by the MP Rural Development Bank through Kisan Credit Card. Financial aid was also provided to produce more millets as well as its processing. Along with this, assistance was also given for training of millets papad, while the grant for drones was provided through FPO. Union Minister Shri Tomar also gave away tablets to 14 beneficiaries of the Breed Improvement Center established at Tigra village near Bhamour for its technical upgrading.

During the three-day mega agricultural fair and exhibition being organized in Morena, 143 different stalls have been set up, where farmers are getting information with enthusiasm. Through the exhibition, farmers are being motivated for improved farming and agricultural innovation. Stalls have been set up by National Institutes under the Indian Council of Agricultural Research (ICAR) and Agricultural Universities on themes including Natural Farming, Nano Urea, Animal Nutrients, Fisheries, Water Conservation, Micro Irrigation, Crop Insurance Scheme and Agriculture Startups.

Union Minister of Agriculture and Farmers Welfare, Shri Narendra Singh Tomar, along with Union Minister of State Shri Kailash Chaudhary and Minister in-charge of Morena, Shri Bharat Singh Kushwaha also visited the fair and interacted with the farmers and stall holders during the day. Promoting innovative practices in modern farming, the demonstration of farmer drones in this fair is also being keenly watched by the farmers.

Shri Tomar has also made a special request to the farmers to witness the drone exhibition. Farmers from far flung areas are also coming to see the exhibition and are delighted to see agricultural implements and other products. This three-day agricultural fair and exhibition will conclude on November 13.