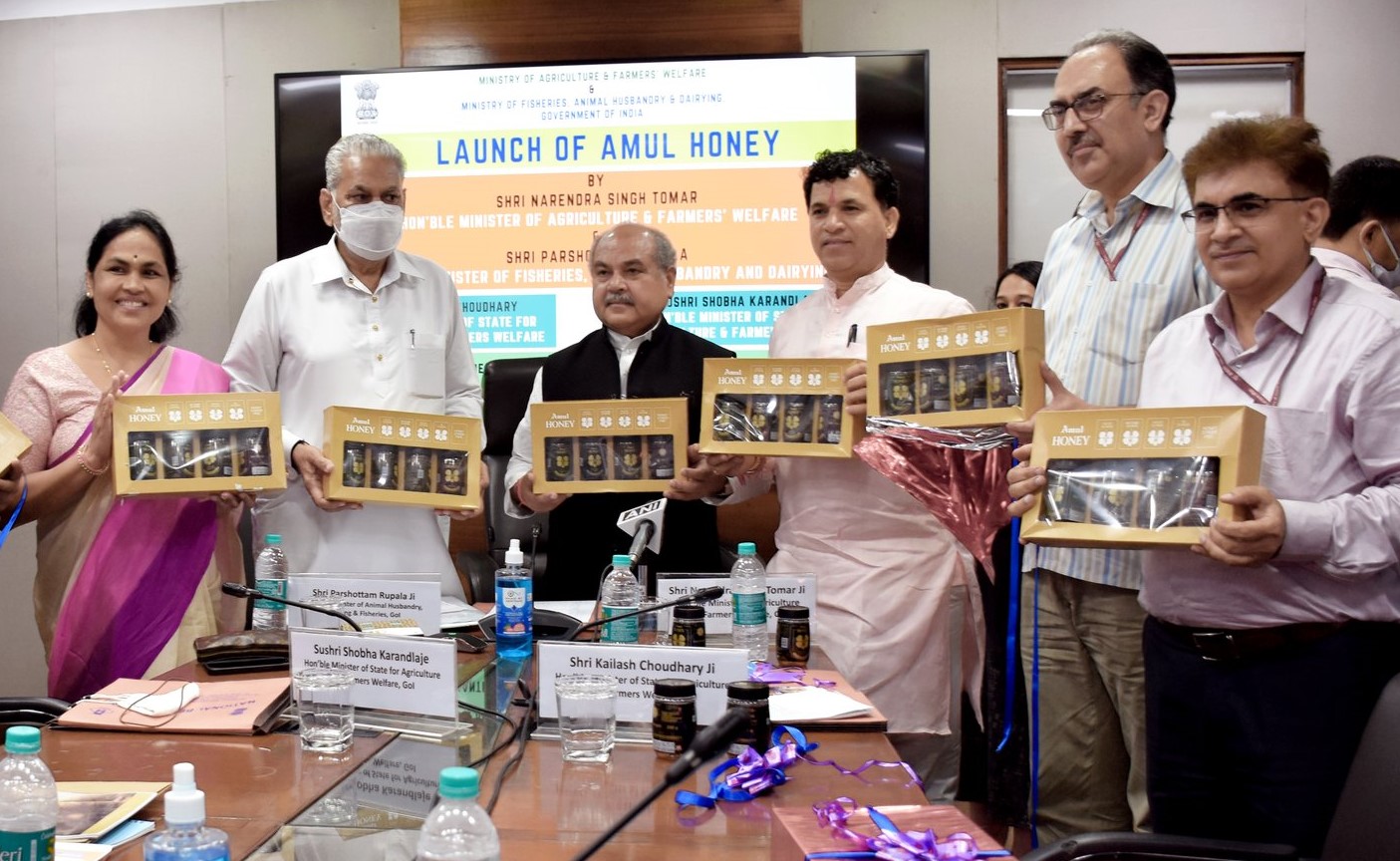 New Delhi: Union Minister for Agriculture and Farmers’ Welfare Shri Narendra Singh Tomar launched ‘Amul Honey- a product of Gujarat Cooperative Milk Marketing Federation Ltd. (GCMMF)’ under active cooperation with ‘National Bee Board (NBB)’ today virtually in the presence of Union Minister for Animal Husbandry, Fisheries and Dairying Shri Parshottam Rupala. Addressing the launching event, Shri Tomar emphasized the importance of National Beekeeping and Honey Mission in increasing the income of small farmers, which is being implemented in the country for doubling income of farmers or beekeepers through beekeeping with the budgetary allocation of Rs. 500 crores.

Shri Tomar said that there are 86% small farmers in the country. In order to increase the income of these small farmers, it is necessary to connect them with other dimensions of agriculture like beekeeping. The Minister said that Prime Minister Shri Narendra Modi had expressed his desire for a sweet revolution on the soil of Gujarat and today, by launching Amul Honey, India has started the journey towards fulfilling the dream of the Prime Minister.

Speaking on the occasion, he expressed that quality of honey is a major concern in the country for which 5 large scale Regional Honey Testing Labs and 100 Mini Honey Testing Labs are being set up all over the country. “It should be our constant effort that the quality of our honey products should also meet the global standards as there are lots of export opportunities in this sector”, he added. The Minister assured the beekeepers or farmers of the country that Government of India will provide all necessary support for promotion & development of beekeeping in the country.

Appreciating efforts made by Gujarat Cooperative Milk Marketing Federation (GCMMF), Shri Tomar said Amul has not only set up a milestone in the direction of the White Revolution but it also expanded in the milk processing sector and established itself as a global brand. Beside this, Amul also provides employment opportunities to marginal farmers and significantly contributes in overall progress of the country in dairy sector. The Minister also assured GMMF that the Agriculture Ministry will look into the proposal for establishing a testing lab in Gujarat.

Shri Parshottam Rupala congratulated GCMMF on launching its Honey product. He also expressed happiness that Amul Honey is being launched after testing it as per the global standard. He said promoting beekeeping and selling honey through cooperatives will give a boost to the rural economy. He also encouraged farmers/bee keepers that alongwith honey, they can also produce additional by products of beekeeping, viz.; bees wax, pollen, royal jelly, as these products have high demand and better prices in Indian and international market.

Shri Sanjay Agarwal, Secretary (A&FW) said that after implementation of National Beekeeping & Honey Mission (NBHM), the whole scenario of beekeeping in the country has changed & thrust is being given on assuring quality of honey, aggregation of beekeepers, providing infrastructural facilities including honey testing labs, Madhukranti portal to stop adulteration in honey production.

Dr. R. S. Sodhi, Managing Director, Gujarat Cooperative Milk Marketing Federation Ltd. mentioned that Dairy Cooperatives and their infrastructural facilities can be simultaneously used for Honey Production through their established set up of 84 Dairy Plants over all the country.