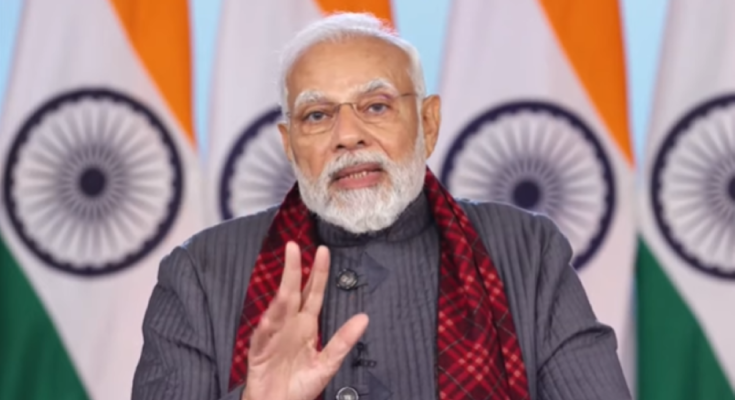 Addressing the gathering, the Prime Minister noted the festivities and said that in this auspicious atmosphere, Telangana and Andhra Pradesh are getting a grand gift which will connect the shared heritage of Andhra Pradesh and Telangana. He congratulated the people of the two states on occasion. He also paid tributes to the armed forces on Army Day and said that the Indian Army is known for its bravery and professionalism.

The Prime Minister pointed out that the Vande Bharat express will greatly benefit both pilgrims and tourists and informed that the travel time between Secunderabad and Visakhapatnam will be further reduced.

The Prime Minister also underlined the speed of work that is taking place with regard to Vande Bharat trains. He mentioned that within 15 days second Vande Bharat is operationalized this year and this indicates the speed of change on the ground. He also highlighted the indigenous character of Vande Bharat trains and their impact and pride in the minds of the people. He informed that 7 Vande Bharat Trains have covered the cumulative distance of 23 lakh kilometres, equivalent to 58 rounds of earth. More than 40 lakh passengers have traveled in Vande Bharat trains so far, he said.

The Prime Minister pointed to the direct link between connectivity and speed and their connection with ‘Sabka Vikas’. “Infrastructure related to connectivity not only connects two places but also links dreams with reality, manufacturing to market, talent to proper platform. Connectivity expands the possibilities of development”, he said. “Wherever there is Gati (speed), there is Pragati (Progress). Whenever progress takes place prosperity is assured”, he added.

The Prime Minister recalled the time when the benefits of modern connectivity were limited to a select few and the bulk of the population was suffering from expensive transportation wasting a lot of time. Vande Bharat train exemplifies the transformation of leaving that thinking behind and a vision of connecting everyone with speed and progress. The Prime Minister highlighted that the times of excuses and poor image of railways and a fatalist approach to the dismal situation changed when with good and honest intentions, these problems were addressed and in the past eight years, this is the mantra that transformed Indian railways.

The Prime Minister said that today traveling by Indian Railway is becoming a pleasant experience. Many Railway Stations reflect the image of modern India. “Work done in the last 7-8 years will transform the Indian Railway in the coming 7-8 years”, he said. Shri Modi elaborated on the measures like vistadome coaches and heritage trains to promote tourism, Kisan Rail to carry agricultural produce to far-flung markets, more than 2 dozen cities have got Metro network and a futuristic rapid rail transit system is emerging fast.

The Prime Minister pointed out the exceptional work that has been done regarding railways in Telangana, in the last 8 years. He informed that 8 years prior to 2014, Telangana had a budget of less than Rs 250 crore for the Railways but today it has increased to Rs 3000 crore. He informed that many areas of Telangana like Medak are now connected by rail service for the first time. He also noted that less than 125 kilometres of new rail lines were built in Telangana in the 8 years before 2014, while about 325 kilometres of new rail lines in Telangana in the last years. He also informed that the work of ‘track multi-tracking’ of more than 250 kilometres has also been done in Telangana and added that the electrification of railway tracks in the state has gone up 3 times during this electrification period. “Very soon we are going to complete the electrification work on all broad gauge routes in Telangana”, the Prime Minister informed.

Concluding the address, the Prime Minister said, “This process of speed and progress will continue like this\’ \’ and congratulated everyone on the Vande Bharat Express train to Telangana and Andhra Pradesh.