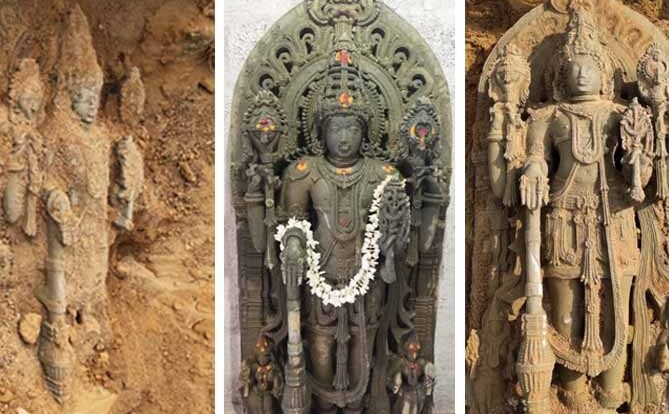 BENGALURU: A rare idol resembling the famous Channakeshava of Hoysala temple at Belur was found during sand extraction at Hale Belur in Sakleshpur taluk recently.

The local people noticed the idol when the earthmover that was being used to extract sand on the bank of river Hemavathi hit it inadvertently.

The beautifully carved 4.5ft black stone idol had the imprint of Hoysala Dynasty sculptors of the 12th century.

As soon as the idol surfaced, the driver of the earth moving machine abandoned his vehicles and took to his heels.

The news of unearthing of the idol spread like wildfire among villagers who rushed to the spot and removed it safely.

Later they brought it and installed it in front of the temple in the village. The people have started offering prayers to the idol. The villagers have urged the officials of the Archaeology department to give permission to keep the idol inside the temple.

Channakeshava Temple was also constructed in Hale Belur during the Hoysala dynasty.

Kumar H.C., the curator of the Archaeology Museum in Hassan, visited the spot and said the idol had been kept in the premises of the Channakeshava temple, which is being renovated.

He appealed to the villagers to hand the idol over to the museum. “As broken idols cannot be worshipped, I have appealed them to hand it over. At present, it would remain in the village. The villagers have kept it in a secure place”, he said.