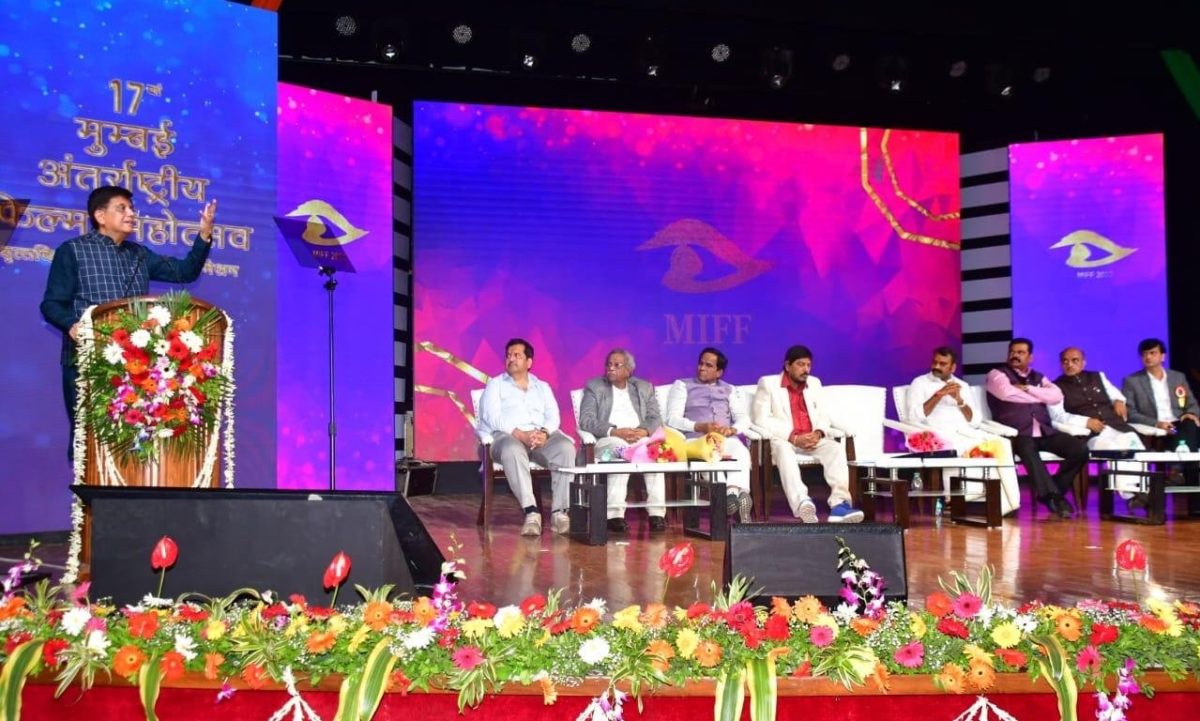 Mumbai: The 17th edition of the Mumbai International Film Festival for Documentary, Short Fiction, and Animation films (MIFF-2022) began with a colorful opening ceremony at the Nehru Centre, Worli.

Union Minister of Commerce & Industry, Consumer Affairs, Food & Public Distribution and Textiles Shri Piyush Goyal inaugurated the seven-day festival organized by the Films Division of Ministry of Information & Broadcasting. To promote wider participation, MIFF 2022 has been organized in hybrid mode, and online viewing of films is free for all those who register at https://miff.in, said the Festival Director Ravindra Bhakar.

In commemoration of Bangladesh’s 50 years of Independence the country has been chosen as the ‘Country of Focus’ this year. A special package of 11 films from Bangladesh including the critically acclaimed film ‘Hasina- A Daughter’s Tale’ will be presented at MIFF 2022.

At the opening ceremony, the coveted Dr. V Shantaram Lifetime Achievement Award was conferred upon veteran documentary film maker and author Sanjit Narwekar, for his contribution to films through his writings especially film history and the documentary film movement.

Narwekar has written and edited more than 20 books on cinema, including ‘Marathi Cinema in Retrospect’, which won him the Swarna Kamal at the National Film Awards. The V Shantaram Lifetime Achievement Award carries a cash prize of Rs 10 lakhs (Rs 1 million), Golden Conch and a citation. This award is instituted in memory of legendary filmmaker V Shantaram, who was closely associated with Films Division as Honorary Chief Producer during the 1950s.

Documentary – a tool that transcends cultures and boundaries – Anurag Thakur

Union Minister for Information & Broadcasting Shri Anurag Thakur in his video message said “documentary cinema creates the most significant impact. It not only educates inspires and motivates a change in the society, but also acts as a tool that transcends cultures and boundaries.”

The Minister also mentioned that MIFF provides a platform where documentary film makers from all over the world get to exchange ideas and explore the possibilities of co-productions and marketing of documentary, short and animation films. He said that this opportunity eventually broadens the vision of the film makers’ vis-à-vis world cinema.

Minister of State for Information & Broadcasting, Dr. L. Murugan in his address spoke about the efforts made to promote Indian Cinema globally. He also pointed out how India has made a greater presence at the Cannes Film Festival and said Shaunak Sen’s film ‘All That Breathes’ made India proud by winning the Best Documentary award.

The Minister said that the Government has announced incentives for international filmmakers and co-productions especially for feature films, animation films, documentary films and web-series. “AVGC sector promotion is happening in a great way. PM\’s call for Digital India and Startup India and Indian contingent at Cannes showcased our culture and ethos” he proudly recalled.