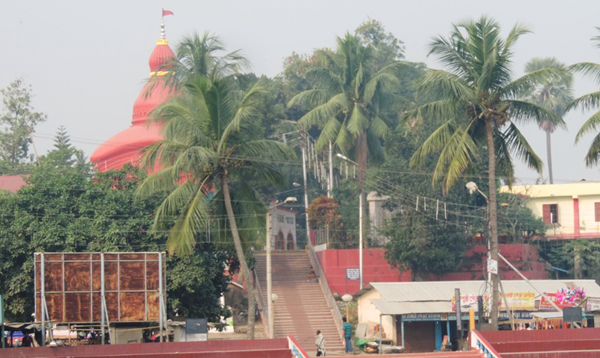 The three-day-long Deepavali’ festival and fair in Mata Tripureswari temple – one of the 51 Shaktipith of Asia, has begun with religious fervour early this morning in presence of various dignitaries at Udaipur. As many as 20 Mangaldeeps brought from different holy places of India were lightened up in the temple and special prayer has been performed in the temple pond – Kalayansagar before Sunday dawn welcoming the Goddess of power.

According to the temple management committee, the Mangaldeeps have traditionally been used in all major temples in the country since ancient times; would now onwards be lighted every day during Arati in Tripureswari temple. The temple city Udaipur of Gomati district in South Tripura has been decorated with various colourful lights, sounds and the entire city took a different look from last night. Even the private houses, shops and apartments were also decorated welcoming the devotees.

Thousands of devotees and puja hoppers have thronged into Udaipur since last night not only from the state also from different parts of the country and neighbouring Bangladesh. A large number of tourists from Europe, America, Africa, New Zeland and Australia were seen in Udaipur today who came to witness Diwali festival in Tripureswari temple.

The Northeast Frontier Railway (NFR) has introduced several new trains connecting Udaipur from different cities of the state to facilitate the devotees to take part in the festival besides; Tripura government arranged a good number bus from different destinations to Udaipur.

Apart from Udaipur, northern towns of Tripura Dharmanagar and Kailashahar besides, Agartala has been celebrated Deepavali festival with religious enthusiasm. More than 5000 community puja of Goddess Kali would be performed tonight and tomorrow in Tripura. The state government has also made elaborate security arrangement for the peaceful celebration of the festival of lights. (UNI)