An actor who portrayed the angry young man, ‘Vijay’ of 70s of India always deserved it 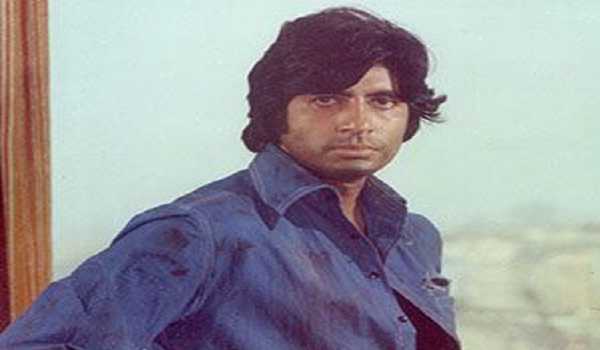 An actor who identified himself with the men on the street and made acting so real forcing millions to remain implicit in his characters for years is the Big B of today . A thespian in his own rights,

Amitabh had once described his meeting with the earlier great Dilip Kumar as one big moment of his life. It was when Dilip Kumar heaped praises on Amitabh for his excellent actings, including that one in Shakti where he had played the son pf Kumar named Vijay.

‘That was the biggest award of my life, Amitabh had recalled. So infectious has remained the artistry of the tall man down the decades that, many who tried to get into his shoes although failed but could make an intelligent blend of that with their own to climb on the graphs.   Dissatisfaction, they say is very strong element in the life of a middle class citizen and Amitabh Bachchan’s films will keep giving refreshing memories to millions of Indians about the roles he played – umpteen number times as Vijay – much befittingly portrayed every Indian’s desire of the time that a man always feels that he could have achieved more.

Born on October 11, 1942 in the family of noted Hindi poet, Harivansh Rai Bachchan and socialite mother Teji – also a friend of Indira Gandhi, Amitabh grew up with best of both the upbringing culture – western lifestyle from mother and the oriental values from his father.

Now that the country has bestowed on him, the highest film award of the country and named after Dadasaheb Phalke, it is worth refreshing what Amitabh in later years had said about his father saying, “If you cannot enter a gate, just jump over the wall”.

This is precisely, his army of fans believe, what he did to achieve the stardom, and of course retained it even at the ripe age of 75 plus with a finesse not mastered by many in the world of entertainment.

With a brooding look, fire in eyes and ire practically emerging out of his soul, his masterpiece roles in films like ‘Zanzeer’, ‘Deewar’ and ‘Trishul’ mirrored the disillusionment of young Indian of that time reeling under controlled economy vices – the joblessness, antagonized family life, corruption and price rise.

It was not without reason when one film writer rightly wrote once, one look at him on the screen and the audience would believe – there was nothing much in life to sing and dance about.

His roles were ‘swinging’ against the stream when he signed for a role as inspector ‘Vijay Khanna’ in Prakash Mehra’s ‘Zanzeer’ in 1973 to record his first milestone performance.

The role came to him only after Dharmendra had rejected it. Grapevine was that with past failures, prior to ‘Zanzeer’, Amitabh was almost planning to quit Mumbai for good!

Zanzeer was his first film as the leading protagonist to achieve box office success that earned him a Filmfare Nomination for Best Actor.

The same year, he married Jaya Bhaduri on June 3 and around this time they appeared in several films together. Later Bachchan played the role of an industrialist’s son Vikram in the film ‘Namak Haraam’, a social drama directed by Hrishikesh Mukherjee and scripted by Biresh Chatterjee addressing themes of friendship.

His supporting role opposite Rajesh Khanna and Rekha was praised as his angst-laden dialogue delivery and manerism won him the Filmfare Best Supporting Actor Award – spelling a tough competition for Rajesh Khanna ahead.

Subsequently ‘Anand’ had made Amitabh and probably unmade Rajesh Khanna. In 1975, he starred in a variety of film genres from the comedy ‘Chupke Chupke’, the crime drama ‘Faraar’ to the romantic drama ‘Mili’.

However, 1975 was the year when he appeared in two films which are regarded as important in Hindi cinematic history. He starred in the Yash Chopra directed film ‘Deewar’ opposite Shashi Kapoor, Nirupa Roy, and Neetu Singh which earned him a Filmfare Nomination for Best Actor.

The film became a major hit at the box office in 1975. He did not look back since then.

Released on August 15, 1975 was ‘Sholay’ (meaning Fire) which became the highest grossing film of all time in India earning Rs 2,36,45,00,000 equivalent to USD 60 million, and perhaps another film that made his position practically invincible.

Although with angry young man image, Bachchan cemented his status as Bollywood’s pre-eminent action hero, the Big B, as he came to be known later, illustrated that he was flexible in other roles, successfully playing the romantic lead, in films such as ‘Kabhie Kabhie’ (1976) and comic timing in comedies such as ‘Amar Akbar Anthony’ (1977) and of course earlier in ‘Chupke Chupke’ (1975) .

In 1979 for the first time, a multi-facet quality of his came to light when Amitabh was required to use his singing voice for the film ‘Mr Natwarlal’ which he starred in alongside Rekha. His performance in the film saw him nominated for both the Filmfare Best Actor Award and the Filmfare Best Male Playback Awards.

In 1979 he also received Best Actor nomination for ‘Kaala Patthar’ (1979) and then went on to be nominated again in 1980 for the Raj Khosla directed film ‘Dostana’ in which he starred opposite Shatrughan Sinha and Zeenat Aman.

In 1981, Amitabh starred in Yash Chopra’s melodrama ‘Silsila’ where he starred alongside his wife Jaya and ‘rumoured flame’ Rekha. Other films of this period include Ram Balram (1980), Shaan (1980), Lawaaris (1981), and Shakti (1982) which pitted him against legendary actor Dilip Kumar.

Amitabh has won numerous awards in his career, including three National Film Awards and a dozen Filmfare Awards and also holds the record for most number of Best Actor nominations at the same.

In addition to acting, he has had a stint in politics as he was elected member of the Lok Sabha from the prestigious Allahabad constituency in 1984. He held on to the seat till 1987 when controversy regarding Bofors gun deal and his friendship with the then Prime Minister Rajiv Gandhi left a sore experience.

Amitabh’s splendid career too has been marked by off-screen controversies like his on and off affairs with fellow actress Rekha.

He was also dragged into controversy by another actress, the late Parveen Babi, who had charged the megastar with ditching him. However, the allegation never stuck and was dismissed as utterances of a frustrated woman, disillusioned with life.

Again Amitabh’s surprising success came when he ventured into small screen through reality quiz game show, ‘Kaun Banega Crorepati’. This role of a Quiz Master with a pet phrase ‘Lock Kar diya jae’ redefined his career and also the history of Indian television.

Since then Amitabh has tasted success in many films including the award winning ‘Chini Kum’, ‘Black’ and ‘Khaki’.

Importantly, opening a new genre film scripts were being written keeping him in mind as the main protagonist.
In 1984, he bagged Padma Shri — India’s fourth highest civilian award.

In 1991, Order of Afghanistan award from Afghanistan and Padma Bhushan, India’s third highest civilian honour, came to him in 2001.

For his role in ‘Agneepath’, Amitabh is said to have bagged a national award and also a pat on his back from the then Prime Minister Chandra Shekhar.