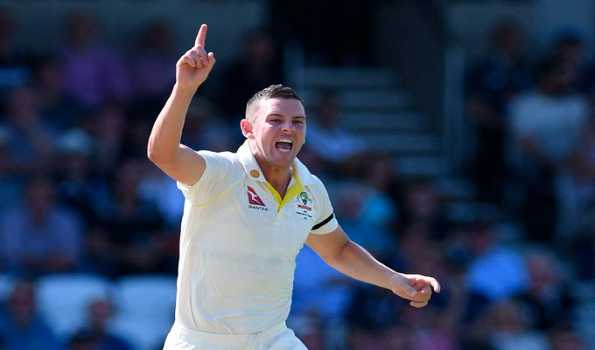 Australia took a major step towards retaining the Ashes after bundling out England for just 67 on day two of the third Ashes Test here.

After being bowled out for 179 on day one, Australia responded spectacularly on Friday, rolling through the England line-up in just 27.5 overs as the hosts tossed away their good work with the ball in the space of a morning.

Josh Hazlewood, so impressive on his return to the side at Lord’s, was rampant once more, removing Jason Roy and Joe Root for 9 and 0, respectively, to get the ball rolling.

Rory Burns’ attempted hook shot went awry as the ball flicked his glove on its way towards Tim Paine from the bowling of Pat Cummins, and Ben Stokes followed next, a slash towards a wide delivery seeing him edge to David Warner in the slip cordon to give James Pattinson his first of the day.

The procession continued and at lunch, England sat perilously positioned on 54/6. Chris Woakes’ departure from the first ball after the break made things worse and just 13 runs were added as England crumbled to their lowest Ashes total in 69 years, handing Australia a

lead of 112. England’s top-scorer in the innings was Joe Denly, who hit 12 and was the only batsman to reach double-figures.

Hazlewood was the man who finished the innings, bowling Jack Leach to claim his seventh five-wicket haul in Test cricket, one that was thoroughly deserved. Nathan Lyon’s off-spin was required for only one over as Australia’s menacing pace attack did the damage.

Warner perished for a second-ball duck in Australia’s innings to give England cause for belief, but a demolition job akin to Australia’s was not to come, an ICC report said.

Leach found turn to go through Marcus Harris’ gate, but Australia’s middle order showed a level of resistance that was amiss during England’s innings. At the heart of their batting display was

Marnus Labuschagne, who is proving to be as much a thorn in England’s side as Steve Smith, the man he has replaced in Australia’s line-up.

Labuschagne offered a chance to Joe Root in the slip cordon while on 14, but the England skipper failed to hold on. Stokes was the disappointed bowler and he was frustrated once more when Bairstow dropped Labuschagne on 42 when diving to his right behind the stumps.

It proved harsh on Stokes, the most threatening England bowler during the evening.

Stokes, failing to find much luck, did remove Matthew Wade to claim his second wicket of the day, and Paine followed shortly to the bowling of Broad to give England further joy. But Labuschagne advanced to a third consecutive Test half-century as Australia ended the day on