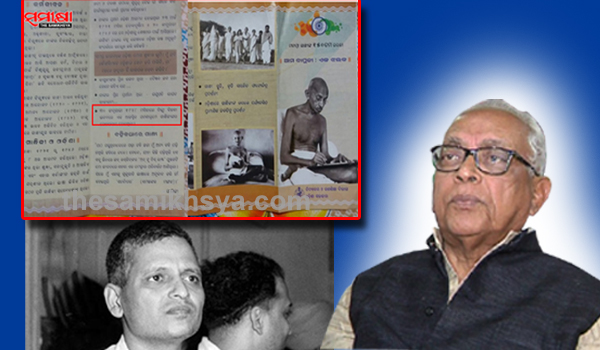 Bhubaneswar, Nov 15 : A two-page booklet released by the Odisha government describing the death of Mahatma Gandhi as an ‘accidental sequence of events has snowballed into a major controversy. The issue figured in the Odisha Assembly today with Congress members condemning the text of the booklet demanded an apology from Odisha Chief Minister Naveen Patnaik.Several members in the house today expressed grave concern over the misrepresentation of fact and demanded a clarification on the issue from the government.

The two-page booklet ‘Aama Bapuji: Eka Jhalaka (Our Bapuji: A Glimpse)’ was published and distributed by the School & Mass Education Department among the students to commemorate the 150th birth anniversary of the Father of Nation. The booklet mentioned that Gandhiji died at the Birla House in New Delhi on January 30, 1948, due to “accidental sequence of events”

The booklet has not mentioned that Mahatma Gandhi was assassinated by Nathuram Godse who was later convicted and sentenced to death. Raising the issue during zero hours Congress Legislature Party leader Narasingha Mishra wanted to know what message the government is going to give to the people by spreading such misinformation. By distributing such a booklet, the State government, he said wanted to give a message that Mahatma Gandhi was not assassinated on January 30, 1948, in Delhi and Nathuram Godse was not his killer.

Mr Mishra said the BJD has surrendered to a party some of whose members are worshipping Nathuram Godse, the killer of Mahatma Gandhi as God. He was supported by his party colleagues Santosh Singh Saluja and Tara Prasad Bahinipati. Condemning it Mr Saluja said the School and Mass Education department should set it right.

Mr Soumyaranjan Patnaik (BJD) said all members of the house irrespective of their party affiliations should condemn it. His party colleague Shashi Bhushan Behera said there might be some printing or editorial mistake in the publication of the leaflet. The Speaker, he said should seek a clarification from the Minister concerned before taking any action.

Mr Amar Prasad Satpathy (BJD)said everybody knows how Mahatma Gandhi was killed and who killed him. Nobody can misrepresent the facts. The Odisha government, he said, gives top priority to Gandhiji’s ideology and demanded the inclusion of ” non-violence” in the preamble of the constitution. If something wrong was published it should be analysed, he said.

After listening to the concern of the members, Speaker S N Patro directed the state government to make a statement on the issue tomorrow. Earlier, after the issue was raised by Gandhians, the state government has ordered an inquiry into the incident. School And Mass Education Minister Samir Dash said that strict action will be taken against those found guilty. (Input UNI)