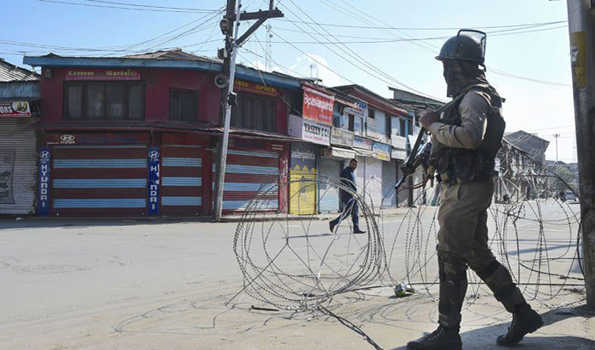 There is no change in the overall situation as strike continued for the 73rd day on Wednesday in Kashmir valley, where people are protesting against the scrapping of Article 370 , besides bifurcation of the state into two Union Territories on August 5.

Internet connectivity and pre-paid mobile service remained suspended since August 5 as a precautionary measure in the valley, where train service between Baramulla in north Kashmir to Banihal in Jammu region has also not been resumed. Though postpaid mobile service has been restored on Monday noon after remaining suspended for 71 days, the authorities snapped SMS service as a precautionary measure to prevent spread of rumours.

The situation remained by and large peaceful during the past 24 hours in the valley, where there is no curfew restriction. However, restriction under Section 144 CrPC continued and additional Central Paramilitary Forces (CPMF) remained deployed in strength since August 5 to prevent any law and order problem.

After witnessing business and other activities for about three hours from 0630 hrs to 0930 hrs in the civil lines, including historic Lal Chowk, and other business hubs in the summer capital today, life again came to halt. Public transport was off the roads in the city.

However, private vehicles and number of three-wheelers were seen plying, particularly in the civil lines and uptown. The State Road Transport Corporation (SRT) buses also remained off the roads.

Students continued to stay away from their institutions though government had announced reopening of schools and colleges besides schedule for 10th and 12th class examinations. The government had closed all educational institutions and asked outside students to leave on August 5.

Elsewhere in the valley, life remained paralysed with shops and business establishments remaining closed and traffic off the roads in Kupwara, Baramulla, Bandipora, Pattan, Handwara and Sopore in north Kashmir. Reports of strike were also received from Anantnag, Shopian, Pulwama, Pampore and Kulgam in south Kashmir, where additional security forces remained deployed to maintain law and order.