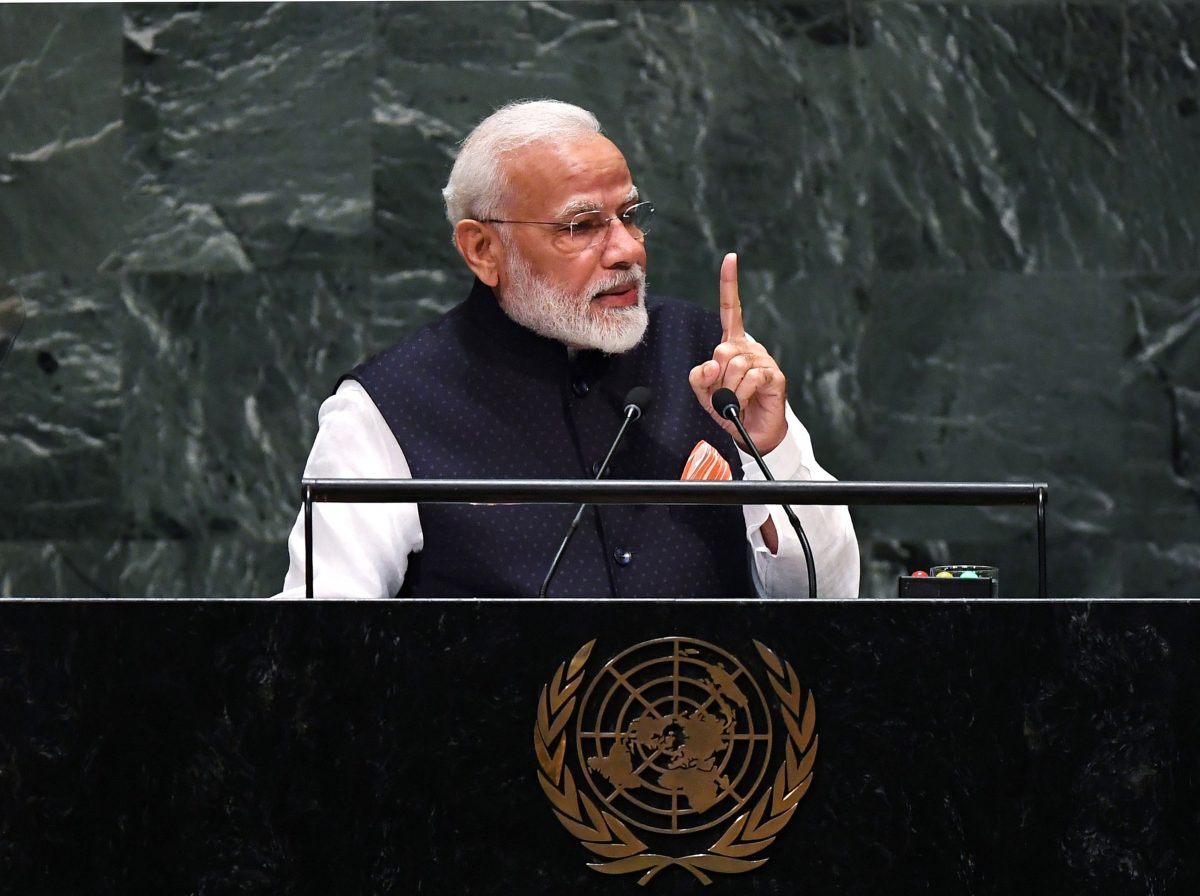 United Nations, Sep 27 (UNI) Prime Minister Narendra Modi on Friday made a strong case for global partnership to solve the global problems including terror. In his much-awaited address to the UN General Assembly – which followed his week long stay in the United States and the series of high-level bilateral engagements, Mr Modi said, ”The world’s largest democracy will take the lead when it comes to furthering global prosperity.”

”For the sake of humanity, the world needs to unite to fight the menace of terrorism. A world divided by violence and terrorism makes a direct assault on the very principle on which the United Nations was founded,” he said in his 20 minute speech. Mr Modi invoked Lord Buddha — one of the foremost apostles of global peace and non-violence — and said, ”I come from a country which has given Buddha and not ‘yudh’ (war). We have given a message of peace and therefore the voice of India against terrorism reflects the general anguish against the menace.”

”Terrorism is not an issue pertaining to one country, but the challenge is faced by the whole world,” he said. The Prime Minister’s speech was bereft of any hard-hitting phrase against Pakistan normally used by him on global platforms and the move is seen as deliberate as he could be keen to de-hyphenate the oft-used phrase ‘India-Pakistan’ trying to give signal on the isolation of the Western neighbour.

Dwelling on the power of common people vis-a-vis their mandate in the recent elections, the Prime Minister said outcome of the polls which gave his government a bigger mandate than in 2014 in effect had a bigger message for the world. ”The mandate was inspiring”.

A large number of members of the Indian community had gathered outside United Nations Headquarters, ahead of Mr Modi’s address. He referred to the philosophy- Jan Bhagidari to Jan Kalyan to Jag Kalyan and said public participation for people’s welfare like the successful ‘Swachh Abhiyaan’ has given a new message to the world.

The Prime Minister said, ”When 37 crore Indians are included in world’s largest financial inclusion programme in just five years time, it gives immense hope and faith to world over.” Mr Modi said he has seen ‘No more single use plastic’ banner on the walls of the UN building and said India has already launched a massive campaign on the same.

He reaffirmed India’s belief in multilateralism at the global platform and said India will continue to make efforts to make the nation and the world a better place. This is seen when India takes a lead in harnessing renewable energy, unites the world to come together for disaster management, contributes among the highest in UN peacekeeping missions.

”After all, when India prospers, the world will naturally prosper”, he said adding ”When India is strengthened the world is strengthened.” Mr Modi said guided by ‘Sabka Saath, Sabka Vikas, Sabka Vishwas’, his government has undertaken development initiatives unparalleled in India’s history. In this context, he referred to the various achievements in socio-development sectors and said about 50 crore people are getting access to top quality and affordable healthcare.