Odisha BJP brainstorms for a leader to lead them to 2024, who is he ? 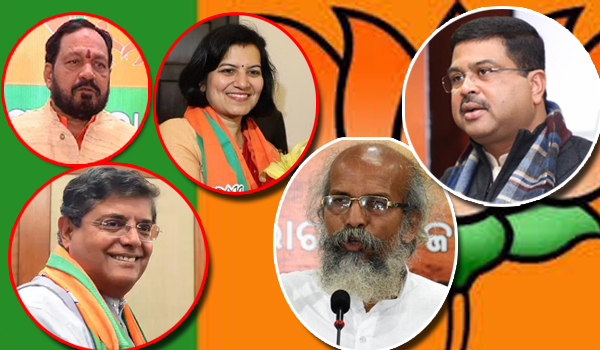 There is a noticeable calm in the Odisha unit of the Bharatiya Janata Party. Calm that prevails is not merely born out of the predominant political stance of the Biju Janata Dal but, there are other reasons why the once vibrant state unit has chosen a silence in many issues that smacks of endurance.

At the national sphere a robust hold on politics and power by Modi-led government has not been able to breath the required energy into the saffron unit here unlike it had demonstrated during the pre-election phase. Since then things have changed in Odisha BJP, injecting into it a semblance of poise for some time to come.

But such an wait cannot be a lasting one nor the BJP’s central leadership can afford a foreclosure of that kind . Lying in wait may be the present recourse before the group of leaders in Odisha re-discover its lost momentum. .

Which obviously makes 2024 as the next goal post that the BJP state leaders here are looking at with a crystal ball ! They know that, now they are up against a wall built by a brute BJD majority. Although the BJP had not done so bad, percentage wise,  in Odisha in the 2019 polls but, the bigger question is who are they rallying behind for a good future, in case.

It may be rubbished as hypothetical by many but BJP in Odisha  should take a lesson or two  from their central leadership as how to bury individual differences and stand up firm against any opponent that took Modi to pin down after so many years. That is the Congress, which virtually stands in a quicksand now.

Let’s look at the difference. Modi-led NDA enjoys absolute power and rallying behind one man unequivocally. Although it is a different matter that whether an absolute power for any dispensation is a healthy sign for a democracy or not, that can be left for debates to come if need be.

But one thing is clear that the central dispensation stands firm on one pillar and that is Modi. Is the situation in Odisha BJP same. Talking to a few senior leaders in Odisha BJP one is left to wonder at the scenario that seems resting on notional yet jittery disagreements over a leadership that the BJP unit here suffers from.

The media here has used to its advantage the schismatic symptoms the BJP here is fraught with. Pitchforking someone for a pressing electoral exigency is different but what the people of Odisha would look up to is a face in Odisha amid the squabbling back-talks those connote intolerance.

‘ Things are not in conformity with a party as disciplined as the BJP to leave all in suspense over who leads us ‘ wondered a senior BJP leader here requesting anonymity. ‘ Whatever, our travel to 2024 should not be left headless. The national leadership has taken note of it’  he added

Besides the old guards in the party, who have slogged with the ups and downs  doggedly for over two decades, can hardly be expected to accept paratroopers no matter who are they.

Even if, hypothetically, the BJP in Odisha qualifies to lead a dispensation in Odisha, then either the central leadership should allow a process of consensus to project a leader or it should allow an electoral process.

Regardless of the high-decibel discourses aired by the state BJP leaders, a majority of them are left to be either fall in line or finish as hangdogs.