UP polls: Electioneering peaks in all 11 Assembly seats 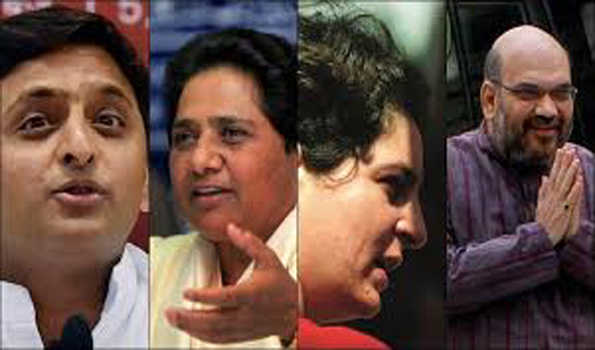 Electioneering is at its peak in the by-election to 11 seats of the Uttar Pradesh Assembly where polling is scheduled for October 21.

Campaigning will end on Saturday at 1800 hrs and polling will be held on October 21 from 0700 hrs to 1800 hrs under tight security arrangements. The counting of votes for this mini-Assembly polls in the state would be taken up on October 24.

EC has deployed central forces in all the 11 Assembly constituencies which have reached their respective areas and were holding flag marches to instill confidence among the voters.

Meanwhile, all the prominent political parties have claimed their stake in all the 11 seats which is witnessing a four-cornered contest giving an edge to the ruling BJP.

Though the BJP candidates are sitting comfortably in most of the seats going to the bypolls, but in at least in three seats– Ghosi, Rampur and Jalalpur, there would be a nail biting finish.

The saffron party is channelising all its energy into winning all the seats and organising several public meetings, conclaves for women and meetings with farmers, OBC, ST among others. Chief Minister Yogi Adityanath has visited all the pound-bound constituencies. Although the party has eight of the 11 seats in the state, a look at the poll percentage reveals that registering big win won’t be an easy task for the BJP.

The first challenge for the BJP is likely to come from the Ghosi Assembly seat in the Mau district where the party had won with a very thin margin in the 2017 state assembly polls. The then BJP candidate Phagu Chauhan had won with just 7,000 votes, despite PM Narendra Modi’s popularity. The runners up spot was taken by Bahujan Samaj Party candidate who got 34 per cent votes. The seat was vacated after Chauhan was appointed the governor of Bihar. This time, Vijay Rajbhar is the BJP candidate on this seat. Rajbhar, who is contesting assembly elections for the first time, is likely to face tough competition from the opposition parties.

The Jalalpur Assembly seat of Ambedkarnagar, which is considered a BSP stronghold and houses a sizeable amount of Dalit, Muslim and Brahmin communities, poses another challenge for the saffron party. The seat was vacated by BSP’s Ritesh Pandey after he got elected to Lok Sabha in 2019.

Although BJP 2017 candidate Rajesh Singh did not win this seat, he did raise party’s hopes of performing well in the bypolls. However, many believe that Singh stood runner-up because of the political legacy of his father Sher Bahadur Singh, who had won this seat on a BJP ticket in 1996, after which he won the seat as an independent candidate, and then again with SP and BSP tickets each.

Another seat that may prove difficult to win is Rampur, which been voting for Samajwadi Party leader Azam Khan since 1980, barring once in 1996 when he lost to a Congress candidate. Considered a traditional stronghold of the Samajwadi Party, the seat will witness a four-cornered contest wherein Muslim votes would be divided between the SP, BSP and Congress. In a bid to retain the seat, the SP has announced candidature of Azam Khan’s wife Tazeen Fatima. The BJP has fielded Bharat Bhushan Gupta.

Similarly in Rampur assembly seat, the challenge is not just for BJP but for the SP and BSP as well. “It will be after a long time that Azam Khan will be face a challenge from the residents of Rampur. In such a situation, there seems to be scope for the BJP to make a dent on this seat. Rampur will be a challenge for the BJP as well because it might not get a better chance to snatch away Azam’s stronghold.”

Political experts feel that the BJP’s poll preparations are way ahead of other parties and the party also has the benefit of there being a divided Opposition in the state. The BSP is contesting these bypolls which is proving beneficial for the BJP. This time, the CPI and CPIM have also fielded their candidates. A weak opposition has weakened the issues of inflation and unemployment against the government.

BJP has the upper hand in the bypolls is the Gangoh Assembly seat of Saharanpur which will be witnessing a four-cornered fight. Taking a look at the figures of 2017 state assembly polls it is seen that the BJP had bagged highest 39 per cent votes while surprisingly the runner up was the Congress party with 24 per cent votes.

But in the remaining seats like Lucknow Cantonment, Pratapgarh, Iglas, Govindnagar, Manikpur and Balha, the BJP has an edge as there would be a four-cornered contest.(UNI)