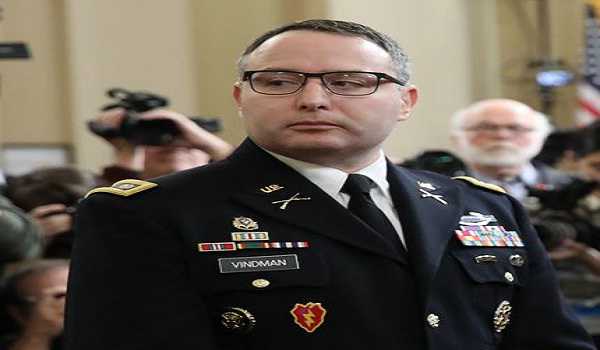 Washington, Nov 20 (UNI) White House has recently attacked its own top Ukraine official as he testified to an impeachment hearing against US President Donald Trump.

Lt Col Alexander Vindman told Congress that a phone call made by the president was “improper” and had left him in “shock” as Mr Trump made unsuitable political demands of the Ukrainian president. “I couldn’t believe what I was hearing,” British Broadcasting Corporation (BBC) quoted official.

A decorated Iraq war veteran, Lt Col Vindman serves in a senior role on the US National Security Council (NSC). He testified before the House on Tuesday in his Army dress uniform.

Meanwhile, the official White House Twitter account posted a critical quote from his former boss on the NSC questioning his judgement.

Republican congressmen pressed Lt Col Vindman on the remark and questioned his loyalty to the US – asking about instances in which Ukrainian officials approached him about becoming the country’s defence minister.

“Every single time I dismissed it. I am an American,” the Lt Col replied.

The official Twitter account of the White House was used throughout the hearing to attack Lt Col Vindman and the inquiry in real time, retweeting hashtags including #ShamImpeachment and #ParodyImpeachment.

The Trump administration’s use of a taxpayer-funded account to attack opponents has drawn criticism in the past.