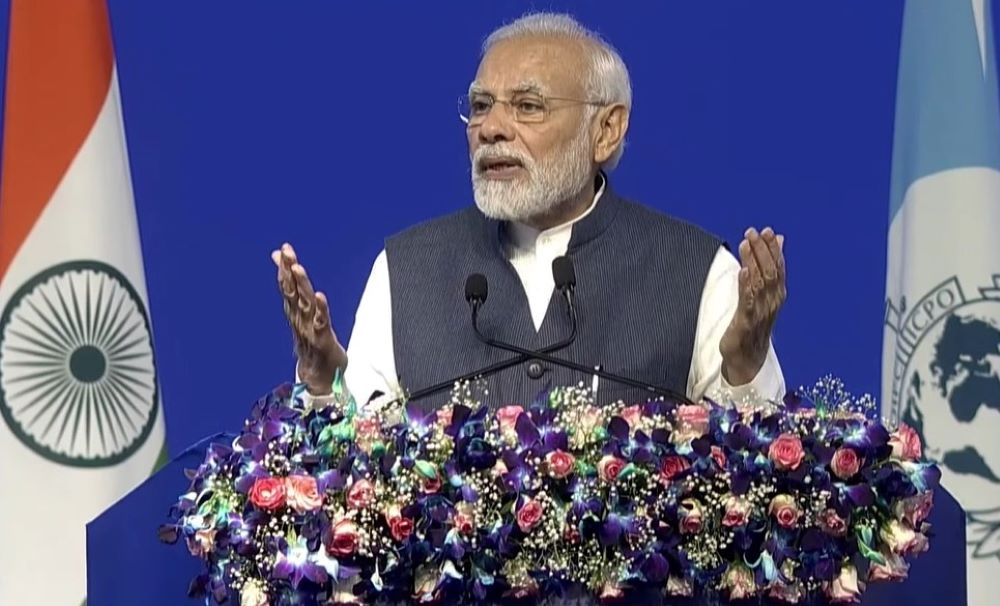 Addressing the gathering, the Prime Minister extended a warm welcome to all the dignitaries on the occasion of the 90th Interpol General Assembly in New Delhi. The Prime Minister highlighted that India is celebrating 75 years of its independence which is a celebration of people and cultures.

The Prime Minister also informed that Interpol will be celebrating 100 years of its inception in the year 2023. He remarked that it is a time for retrospection as well as a time to decide the future. Shri Modi further added that it is a great time to rejoice and reflect, learn from setbacks and look to the future with hope.

The Prime Minister highlighted the connection of Interpol philosophy with Indian culture and underlined the similarity between the INTERPOL’s motto of ‘Connecting Police with a Safer World’ with quote from the Vedas stating “Aano Bhadra Krtavo Yantu Vishwatah” i.e. let noble thoughts come from all directions, which, he elaborated that it is a call for universal cooperation to make the world a better place. Remarking on the unique global outlook of India, the Prime Minister highlighted that India is one of the top contributors in sending brave men and women to the United Nations Peacekeeping operations.

Shri Modi said, “We made sacrifices to make the world a better place even before India got independence.” He further added that thousands of Indians have sacrificed their lives in world wars. Talking about Covid vaccines and climate targets, the Prime Minister informed that India has shown a willingness to take the lead in any kind of crisis. “At a time when nations and societies are becoming inward-looking, India calls for more international cooperation. Global cooperation for local welfare is our call”, Shri Modi added.

The Prime Minister further added that police forces across the world are not just protecting people, but are furthering social welfare. “They are at the frontline of society’s response to any crisis”, Shri Modi added. The Prime Minister gave the example of the covid crisis and pointed out that police personnel put their own lives at risk to help people out. “ Many of them even made the ultimate sacrifice in service of the people”, he said.

The Prime Minister underlined the geographical and cultural diversity of India and talked about its size and vastness of India. “Indian Police”, he said “at the federal and state levels, cooperate to implement more than 900 national and around ten thousand state laws.” “Our police forces work while respecting the diversity and rights of the people promised by the Constitution.

They not only protect the people but also serve our democracy”, he said. Speaking about the achievements of Interpol, the Prime Minister remarked that Interpol has connected police organizations globally across 195 countries for the past 99 years, and to mark the glorious occasion, the Government of India is releasing a commemorative stamp and coin.

The Prime Minister reminded about many emerging harmful globalized threats that the world faces such as terrorism, corruption, drug trafficking, poaching and organised crime. “The pace of change of these dangers is faster than earlier. When threats are global, the response cannot be just local! It is high time that the world comes together to defeat these threats”, he said.

Throwing light on the evils of transnational terrorism, the Prime Minister remarked that India has been combating it for several decades, even before the world recognised it. “We knew the price of safety and security. Thousands of our people made the ultimate sacrifice in this fight”, Shri Modi added.

The Prime Minister elaborated that terrorism is no longer fought only in the physical space but is spreading rapidly through online radicalization and cyber threats. The Prime Minister explained that an attack can be executed or systems can be brought to their knees just by the click of a button. Reiterating the need to further develop international strategies, the Prime Minister said, “Each nation is working on strategies against them. But what we do within our borders is no longer enough.”

The Prime Minister elaborated on the dangers of corruption. He said that corruption and financial crimes have harmed the welfare of the citizens of many countries. “The corrupt”, he continued, “find a way to park the proceeds of crime in different parts of the world. This money belongs to the citizens of the country from which they have been taken.” Often, this has been taken from some of the poorest people in the world. Furthermore, the money is put to many deleterious uses.

The Prime Minister emphasized that there is a need for the global community to work even faster to eliminate safe havens. “There can be no safe havens for the corrupt, terrorists, drug cartels, poaching gangs or organized crime. Such crimes against people in one place are crimes against everyone, crimes against humanity”, he added.

The Prime Minister continued “Police and law enforcement agencies need to devise procedures and protocols to increase cooperation. Interpol can help by speeding up Red Corner Notices for fugitive offenders. The Prime Minister remarked, “A safe and secure world is our shared responsibility. When the forces of good cooperate, the forces of crime cannot operate.”

Upon his arrival on the dais, the Prime Minister witnessed the Entrance of the Colours – a march past by the ITBP contingent. This was followed by the National Anthem of India and the Interpol Anthem. The Prime Minister was presented with a bonsai plant by the President of Interpol. Subsequently, the Prime Minister released a commemorative postal stamp and a Rs 100 coin to mark the 90th Interpol General Assembly

The 90th General Assembly of Interpol is being held from the 18th to the 21st of October. The meeting is being attended by delegations from 195 Interpol member countries comprising ministers, police chiefs of countries, heads of national central bureaus and senior police officers. The General Assembly is Interpol’s supreme governing body and meets once a year to take key decisions related to its functioning.

The Interpol General Assembly meeting is taking place in India after a gap of about 25 years – it was last held in 1997. India’s proposal to host the Interpol’s General Assembly in 2022 at New Delhi coinciding with celebrations for the 75th year of India’s independence was accepted by the General Assembly with an overwhelming majority. The event provides an opportunity to showcase best practices in India’s law and order system to the entire world.