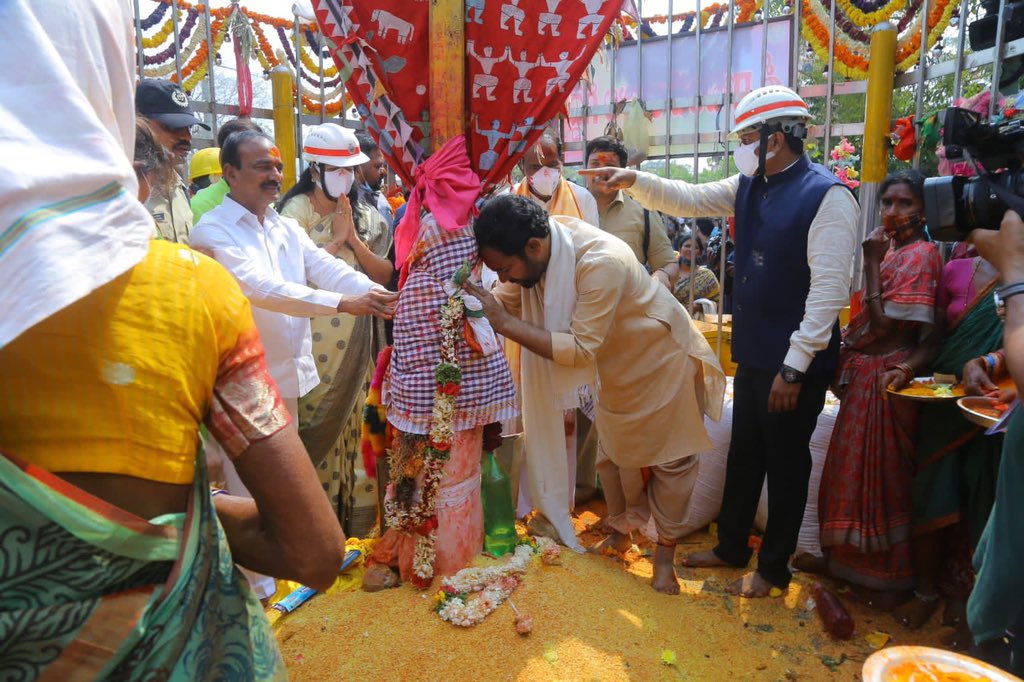 New Delhi: The four-day long, country’s biggest Tribal fair Sammakka Saralamma Jatara concluded yesterday after being celebrated with traditional fervour and zeal. It is said to be one of the largest gatherings of tribal communities.

This year the historic festival began at Medaram village in Mulugu district of Telangana on February 16, 2022 with participation of thousands of devotees. As per the age-old ritual, the tribal priests performed special pujas at Chilakalagutta forest and the Medaram village. The devotees huddled around the road worshipping the tribal deities and walked barefoot to offer jaggery to the goddesses.

G Kishan Reddy, the Union Minister for Culture, Tourism and Development of the NorthEastern Region (DoNER) visited the ongoing Sammakka-Saralamma Medaram Jatara and offered prayers to the goddesses Sammakka and Saralamma. The Union Minister was accompanied by Smt. Renuka Singh, Minister of State for Tribal Affairs.

During his visit  G Kishan Reddy, as per tradition, offered jaggery which is popularly also known as ‘Bangaram’ (Gold), equal to his weight. He said, “I seek blessings of Sammakka and Saralamma Ammavaarulu for the people of India. This festival and the congregation of the devotees exemplifies the cultural values and ethos of India. The lives of Sammakka and Sarakka and their fight against injustices and tyranny continues to inspire all of us and is worth emulating”.

The Union Minister of Culture, Tourism and DoNER added, “The Sammakka Saralamma Medaram Jatara is one of the largest Tribal festivals in the world and the government is extending all possible support. Recently, the government of India under the Prime Minister released a total amount of Rs 2.5 crores through the Ministry of Tribal Affairs and the Ministry of Tourism to celebrate this festival.

Since 2014 the Ministry of Tourism Government of India, under the Domestic promotion and Publicity including hospitality scheme has released 2.45 crore for celebrating several festivals across the state of Telangana”.