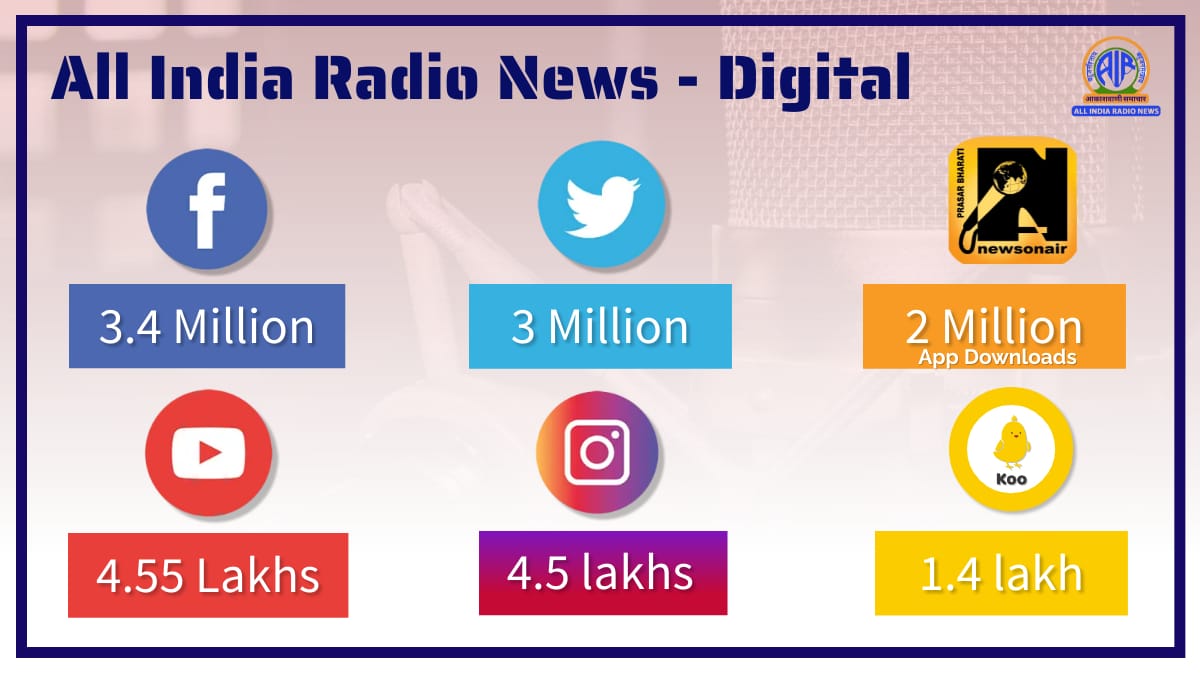 New Delhi: When it comes to trust and authenticity in the news media industry, News network of All India Radio outshines one and all. A 2021 report by Reuters Institute vouched for the same and this is further corroborated by the trailblazing milestones achieved by the digital platforms of All India Radio News network; the most recent being 3 Million Followers on Twitter.

Since its inception in 2013, this twitter handle has seen consistent growth with impressions clocking around a Million per day. Apart from this handle, regular updates are also available on AIRNewsHindi and AIRNewsUrdu. AIR is also disseminating News in regional languages through its 44 Twitter handles across all States and UTs.

In tune with the changing times, AIR News has expanded its footprint across multiple social media platforms in a big way to reach out to maximum number of listeners, especially the youth. All India Radio has been providing News updates on various other digital platforms like YouTube, App, Website, Facebook, Instagram and Koo, along with the traditional means, thereby making it the ubiquitous medium to access trustworthy news.

Growth of the ‘News on AIR official’ YouTube channel to 4.5 Lakh subscribers in a short duration of 3 years reflects the relevance of All India Radio news on all platforms. Since it started streaming in 2019, it has seen linear growth on viewing time, which has increased to more than 22 Lakh hours and total impressions adding up to more than 38 Crores. The growth on all these platforms is purely organic.

In yet another landmark, the number of followers on Facebook for AIR News has crossed 3.4 Million. The followers on the AIR News Facebook page are from more than 43 different countries. This makes it the voice of India and also a link between India and Indian Diaspora across the globe. Radio shows like World News program, with focus on Indian perspective, became popular in a very short span of time.

Prasar Bharati CEO Shashi Shekhar Vempati lauded the feat. He met the social media team at Akashvani Bhawan and urged them to scale new heights with their creative spirit. Principal Director General, All India Radio News, NV Reddy said that it is the result of teamwork and a reflection of the credibility AIR News enjoys among people.

Student specific programs like Abhyaas, Quiz on Freedom Movement and Sports Quiz have evinced interest amongst the new generation to consider AIR as a regular feature in their media diet. Further contributing to connecting J&K with the mainstream, a special segment ‘Jammu Kashmir – EK Nayi Subah’ has been added to the already diverse bouquet of AIR programming.

In order to reach out to the Diaspora, and to enhance India’s global outreach and soft power, AIR News has doubled the transmission in foreign languages including in Dari, Pashto, Baluchi, Nepali, Mandarin Chinese and Tibetan.

Apart from traditional and social media platforms, All India Radio is also available on DD FreeDish DTH and DRM.

All India Radio, established in 1936, is the largest Radio network in the world. It broadcasts news and current affairs programmes in 77 Indian and 12 foreign languages.